You may have been wondering where the Good Food Fighter has been. Well, as much as I love writing and sharing my research, I have taken a break from my blog because of my despair over the success of large corporations in influencing the beliefs, habits, and behavior of an unsuspecting public. Meanwhile, tiny entrepreneurs like me who want to heal and empower people are drowned out, discredited, and sued out of business for challenging the establishment or for forging a different path.

Every time a reader, friend, or stranger seeks help and I’m able to provide it, I feel a sense of pride and satisfaction. Whether it’s a tip about healthy snacks for your kids or how to find authentic non-mafia olive oil or where to buy mercury-free fish, I live for my successes in educating people far and wide and setting them on the path to health.

Meanwhile, some of the companies with the biggest budgets and the most resources routinely engage in unethical practices, like trying to convince customers to do things that are not in their best interest or are actually harmful. Sometimes I feel encouraged that there are thousands of people like me speaking truth to power, and other times I wonder if it is all for naught, because powerful corporations can just steamroll over us with their propaganda machines and silence our voices.

“…some corporations manipulate science and scientists to distort the truth about the dangers of their products, using a set of tactics made famous decades ago by the tobacco industry.”

That is why I have gone quiet; I’ve been stewing in my philosophical juices, wondering if I should keep blogging about the usual topics—my favorite new breakfast cereal, the essential oil that cured my skin rash—or whether there are bigger fish that need to be fried.

And then I stumbled upon an article that reveals the ugly underbelly of American Capitalism, a scathing exposé about how science has been gut-punched and fallen to its knees at the hands of powerful players. 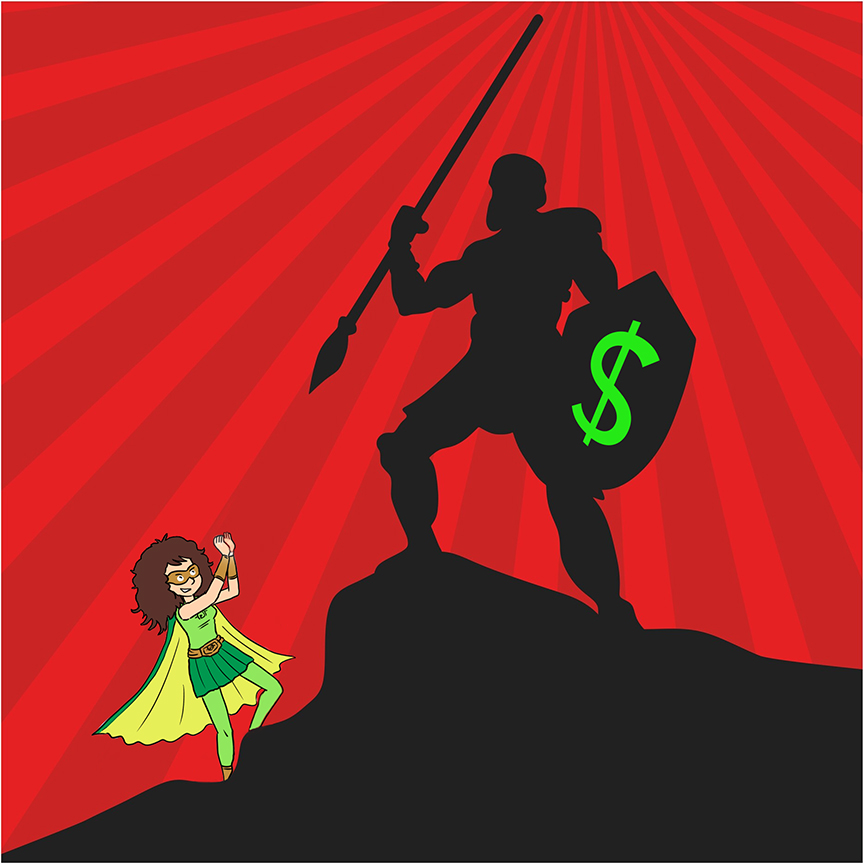 Meet the Union of Concerned Scientists

This is an independent organization run by scientists who don’t take money from government or corporations. In a painstakingly researched and referenced article they reveal one scandal after another and explain the time-tested formula that companies use to deceive and confuse you. For example:

This has been going on for nearly a century, and still, the average consumer is completely unaware.

In a world where journalism seems increasingly compromised by those who fund and control media outlets, I was surprised to find such an honest, damning account of terrible things that have been done by industry with government complicity. I’ve often wanted to write a similar article but feared the wrath of those who blindly trust and never question our medical system, scientific journals, and health and regulatory agencies. This time my head won’t be on the chopping block; I am simply the messenger 😀.

“Some private interests that view science-based solutions as a threat to their bottom lines try to derail those solutions by distorting or drowning out the science—publishing bogus research, manufacturing uncertainty, harassing scientists, or buying credibility through academic affiliations.”

But first, I’ll share two examples of industry disinformation: one is close to my heart; the other, close to my ear.

1.  What famous product was invented in 1927 to fix a non-existent problem?

Wait for it…..ear wax. All through humanity ear wax protected our ear canal, but all of a sudden in the 1920s this beneficial lining became an unsightly nuisance and social embarrassment. Along came Q-Tips to rescue us from all of this nastiness. The marketing campaign was so convincing that the product became a mainstay in most American homes.

And then the injuries started piling up. It turns out that pointy objects are not meant to go into the human ear. According to the American Academy of Family Physicians, the use of cotton swabs in the ear canal has no associated medical benefits and poses definite medical risks. Q-tips rupture eardrums, cause infections and hearing loss, and have been condemned worldwide by doctors, especially otolaryngologists. According to the Journal of Pediatrics, an estimated 263,338 American children went to ER for cotton swab injuries between 1990 and 2010. Even so, Q-tips were never recalled by the FDA. Nearly fifty years after the product was first introduced Q-tips finally added a voluntary warning to the package recommending that use be restricted to the outer ear.

How did a natural body process become demonized? It turns out that wax provides necessary lubrication and keeps dirt, bacteria, and insects from penetrating into the ear. And it gradually migrates out of the ear on its own. Imagine that….your ears are actually “self-cleaning”! 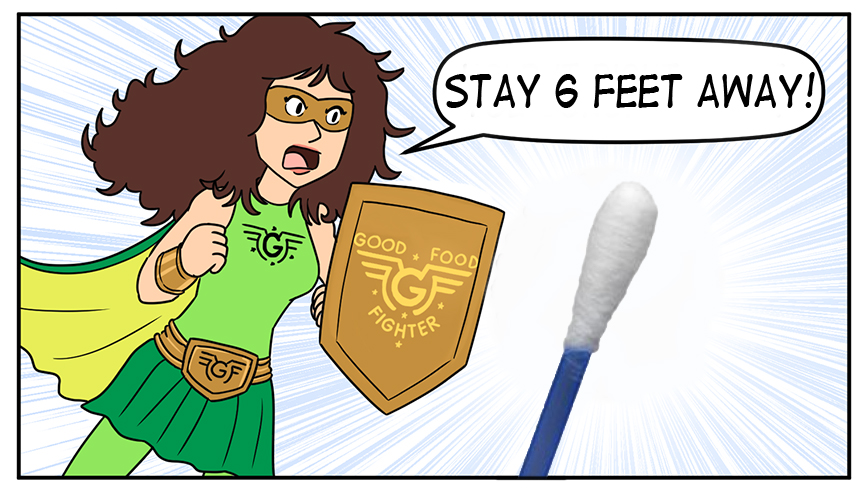 Fast forward nearly 100 years and the company’s website boasts that “Q stands for Quality” and that they’re proud of their history and legacy. Also, their products are “tested carefully”. Tested how? I wonder. And by whom? Where is this research? You’ll still find Q-tips in a majority of American homes.

“…transparency and public vigilance are needed to keep companies from using their deep pockets and powerful networks to promote policies that undermine scientific evidence and threaten public health and safety.”

2. How bad could a mattress be?

This one is more personal: My dear cousin, Red, suffers from a terminal blood cancer called Multiple Myeloma (MM). I advised him to buy a clean mattress, not a cheap industrial brand made from toxic materials. I know from a decade of research that mattresses are one of the most most toxic exposures in the home because you spend a third of your life on it.

Benzene poisoning is one of the known causes of MM, and benzene is one of the most common VOCs released from mattresses from off-gassing. Because of lax FDA laws, chemical cocktails are not listed on the product, nor are they tested for safety. I sent Red a dozen articles and studies about the dangers of conventional mattresses. But he decided to “google” search on his own and found articles by the industry applauding the industry. He was sold by a New York Times product review which gave mattresses a stamp of approval if they carried a specific  “eco” certification. What Red did not realize is that this certification was conjured up by the industry to make their products look good without any independent testing or verification. Who thinks self-regulation is a good way to enforce standards? The author did not disclose her ties to an industry trade association but I figured it out.

I do the research so that you don’t have to! 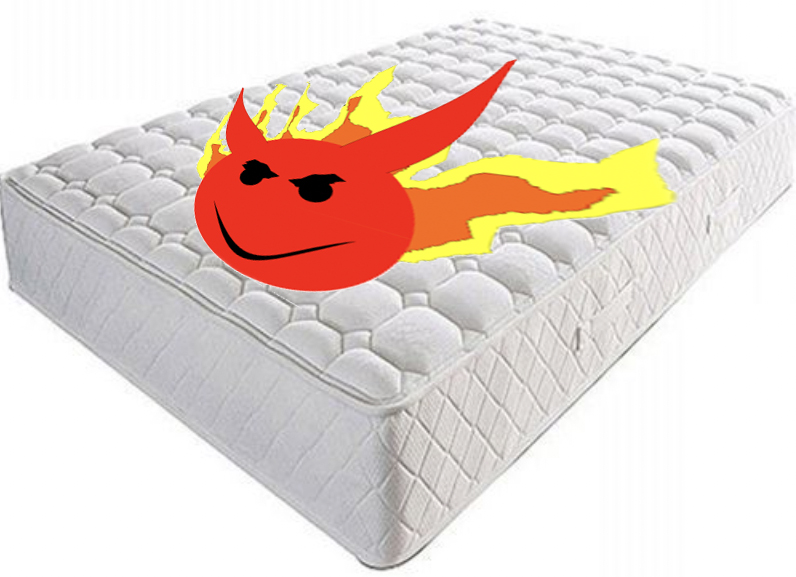 Red bought the toxic mattress. As a small gesture to me he agreed to air it out on his porch for a few weeks. I was distraught that he trusted corporate America over me, but then again they’ve honed their playbook masterfully to win the minds and hearts and pocketbooks of consumers. Heck, they even even hire reputation management companies to scour the internet for any negative publicity or criticism and to knock it down to the dark netherworld of page 27, beyond the attention span of even the most persistent Googler. How do I know this? I have a friend who owns such a company….

Anyway, now I am going to treat you to the Article of the Year, the Hall of Corporate Shame, the damning, deceitful playbook of American industry, using the template that was pioneered and perfected by Big Tobacco. It is now employed faithfully and relentlessly across all sectors including  Big Agra, Big Pharma, and Legacy Media.

So where does most disinformation come from?

I’m sorry if I’ve turned your world on its head. I just wanted to plant the seed of skepticism so that you feel justified questioning what you read and hear, including claims about “science”. Who is funding the study? Do they stand to gain from it? Who has financial conflicts of interest, like regulatory agencies holding patents on the drugs they are supposed to regulate? Ultimately you will become a wiser and savvier consumer, less apt to fall prey to deceitful marketing or fraudulent science and agendas that serve someone else’s interests.

Read this fascinating article at the dinner table and let it spark a discussion, pass it along to your parents, children, your golf buddies, your book club, your PTA, your Bible group, your neighborhood list serve, your Zamba class, your facebook and instagram followers, and everyone else who you care about and want to protect. Everyone deserves to know.

Please share your thoughts in the comments. I want to know what you think! Did you find my article riveting? Disturbing? Were you already aware of all this?

With great hope and humility,
—Your Good Food Fighter

p.s. Notice the date on the linked article. It’s 4 years old but more relevant, more urgent, more timely, than ever.

p.p.s. For those of you who believe that double blind randomized trials are the gold standard of science and that scientific journals accept studies based on merit, I have a huge surprise for you, from a prior editor of the British Medical Journal. Medical research—still a scandal.

The Good Food Fighter’s super fun card game for kids is now at Casa de Luz where you can drop by for a delicious organic meal. Players race to build nutritious Smoothies, and on the way they discover new veggies and power foods that help them win. Sugary ingredients penalize them. Full of vibrant art and entertaining trivia, it makes veggies appealing to even the pickiest eaters. Subscribe to this blog to get announcements and special offers!