A cousin of mine who is especially dear to my heart has an incurable blood cancer called Multiple Myeloma. Typically, the disease damages your spinal column, fractures your bones, causes collapse of the vertebrae and the failure of vital organs. According to his “official prognosis” he has a few years left to live. He is currently on biological medication after having undergone a bone marrow transplant that was not successful. He is living a fairly “normal” life with minimal side effects and tries not to think about the future.
But I think about his future every day, and I am tormented by the prospect of losing him. I veto this fate.

The body is an amazing, versatile, adaptable organism. If it can succumb to disease, it can also heal from disease.
This is a picture of my cousin, whose name and likeness have been changed to protect his identity. His name is Red (not really :)).

So I’m on a crusade. If I set my mind to something I’m like a tank. When I run into obstacles, I try to run them over.

Why do I think I can help him? Isn’t that what doctors are for?

Ah—an important question. He has excellent doctors and is living in the country that continues to revolutionize technology and medicine (Remember Waze—the navigation system that Google bought and you use? How about that handy USB flash memory drive that allows you to transport all your digital data? Or the new pill—ask your gastroenterologist for it—with a tiny embedded camera that will soon replace colonoscopies?) Hey, this country is the only one in the Middle East that’s not in danger of famine because their water supply comes from desalinating ocean water. That’s right—I’m talking about Israel.

So what do Red’s doctors do? They regularly check his blood and adjust his medication, and hopefully they read about the development and trials of all the latest drugs to assess whether he would benefit from any of them. Okay, enough about his treatment. If I reveal too much he will feel violated and then I’ll have to take this post down.

Hence, I ask myself: if I got lung cancer, wouldn’t I stop smoking (if I were a smoker)? Don’t we know about links between chemicals in our diet/environment—not just nicotine—and cancer? Yes, we do. There are almost 100,000 untested chemicals in the environment and food supply in the U.S. alone—many of which are highly suspect—so figuring out which ones may be implicated in your cancer won’t be easy.

So wouldn’t it make sense to remove all toxins and carcinogens that are within your control from your diet and environment? Yes, but your doctors won’t tell you that, and neither will Red’s. Why? Because they are not looking for the causes of cancer. But I am.

AND YET…
In my research about Israel I discovered:

Red told me that he asked at a farmers market if the farmer used an herbicide containing glyphosate (the active ingredient in Round Up). The guy said yes. Red pressed, “Don’t you know that glyphosate  is harmful to human health”. The farmer said yes “but everyone uses it, gotta stay competitive”. Wow.

Another startling fact: kosher produce cannot contain any trace of bugs. Nada. In the old days (that is, from biblical times to the recent past) observant Jews simply washed (or triple washed) their fruits and veggies. But now consumers are spared the trouble: their produce is triple sprayed with pesticides to ensure that every last microscopic bug particle has been annihilated…and mind you, this extra protein is actually harmless. Do Orthodox Jews realize that they are collectively poisoning themselves? I don’t think so. Can’t you choose to not observe the religious dietary laws in Israel and just buy non-kosher produce? Yes, but good luck finding it. 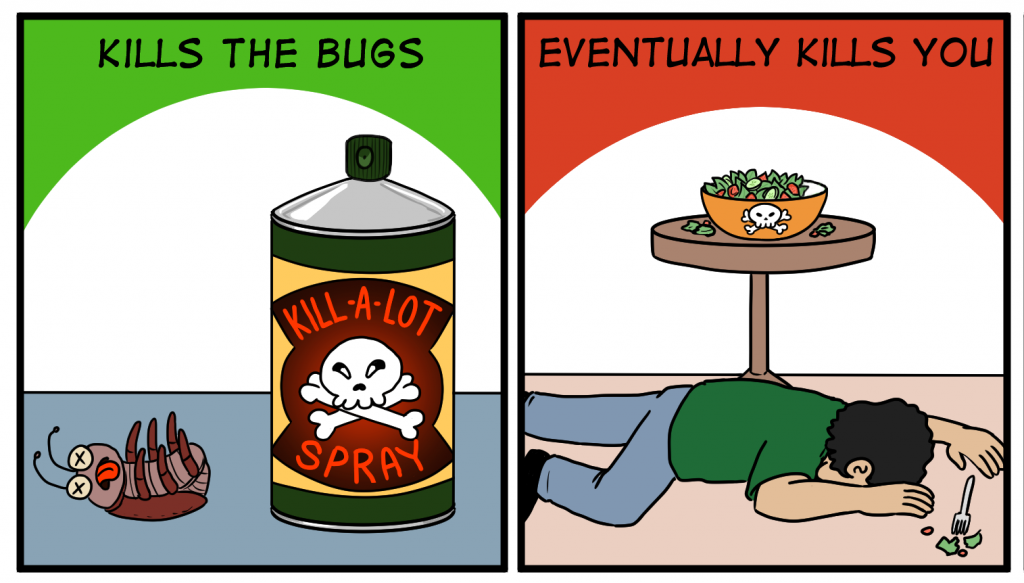 I once ordered a salad at a restaurant in Houston that advertised an “all organic” menu. A splendid mound of greens and garnishes arrived, and as I was about to plunge my fork into it I noticed at the crest a caterpillar wiggling like a belly dancer. I picked up his leaf and carried it into the kitchen, just as an “FYI, guys…”, but did not ask for a replacement or discount; to the contrary, I was pleased to have proof that the salad was, indeed, organic. Hey people, you want to find some bugs on your lettuce. Insects are harmless—you can wash them off. And if you miss one, it won’t kill you.

Israel is a minuscule country—it’s fascinating to look on a map at this tiny speck surrounded by an enormous land mass called the Arab world. It was all barren desert with no agriculture only 70 years ago when it became a State and now almost every square inch has been planted with trees and edible crops. Their crusade to “make their deserts bloom” has been such a dramatic success story that Israelis have built organizations to share their agricultural know-how with struggling agrarian populations all over the world.

Because the country is tiny, industrious, and largely self-sufficient, the distance from the farm to your plate is probably about a day. Farm to Table is the norm. Impressive, right? Better than the food most Americans consume, which travels thousands of miles over weeks and lives in warehouses for years. But the cruel irony here is that Israelis are consuming toxic chemicals in almost every meal: most produce is chock full of pesticides, and from what I’ve read, all wheat—pita, matzos, challah—is sprayed with glyphosate.

A little won’t kill you, but we’re talking about constant exposure. We’re also talking about a very long list of pesticides and fumigants, some of which are slowly being phased out as the health studies pile up. But many highly toxic chemicals—phosphine, chlorpyrifos, formaldehyde, and metam sodium—continue to be used worldwide and in Israel. At a certain point your body becomes overloaded and the liver and kidneys cannot detoxify fast enough. This leads to inflammation, which is a sign that your body is struggling to fight disease. If you don’t eliminate the onslaught of toxins you will succumb to some type of illness.

Red tells me that the hospital he goes to is building a whole new wing for cancer patients since the cancer rate is skyrocketing. Israel has always been on the forefront of cancer research, but the focus is on better detection and treatment. Who is looking for the causes? The Good Food Fighter is.

Cancer has been the leading cause of death in Israel since 1999, accounting for 25% of all deaths. Red tells me that the hospital he goes to is building a whole new wing for cancer patients since the cancer rate is skyrocketing. Israel has always been on the forefront of cancer research, but the focus is on better detection and treatment. Who is looking for the causes? The Good Food Fighter is.

What is causing cancer?

Why did this happen to my cousin? Is there any hope? Can the Good Food Fighter really help?

Many things are causing cancer.

We are just getting started here. The list is long and ugly, but you want to see it. Pesticides certainly play a role but there is so much more. Cancer—except when it’s clearly genetic— is largely due to multiple factors in diet, lifestyle, and environment. I will discuss them in Part 2 of Save my Cousin, Kill his Cancer.

Check out Part 2 of this Series for the GFF list of Known Cancer Causes.

Please send this post to someone you love who is fighting cancer or wants to prevent it.