Ten years ago, my standard protocol when buying fish was to ask: “What’s fresh (not “previously frozen”), wild, and what came in today?” I wanted something as fresh as possible, ideally flown in from the dock same day, and a fish which had lived as nature intended.

After a while, I added “nutrient-dense” to my criteria. It was like a riddle for the fish counter staff: “What’s red and black and read all over?” Or, “What’s fresh, wild, nutrient dense, lived a happy life, went to Montessori school, and was killed painlessly with laughing gas after one last great meal?” The nutrient-dense requirement elevated some fish, like wild salmon, mackerel, and sardines, and eliminated others like catfish and tilapia (sorry, tilapia lovers).

One day I struck up a conversation with a knowledgeable employee at the fish counter at Whole Foods. We talked about the increasing pollution in the ocean and lamented that many lakes and much of the ocean had become a cesspool of toxins. He said that the contaminants in water resembled the ingredient list on my shampoo bottle. I was alarmed by the notion of fish swimming through mercury and other heavy metals, garbage, plus PCBs and dioxins, and then swimming into my mouth. So I reluctantly decided to banish wild fish from my dinner table.

What did that leave me?

Farmed fish. I already knew that conventionally farmed fish were sandwiched into tiny cages and pumped with antibiotics and that open ocean farms were infesting wild populations of fish with drugs and other scourges. But Whole Foods touted their “sustainably raised” fish as a whole different kind of animal—one that wasn’t endangered or endangering other marine life. This seemed responsible enough. So off I went with yummy, extra fatty fish, and for almost a decade that’s what I happily ate.

Until I went to a Paleo convention last weekend. There, I was surrounded by responsible corporate citizens, many of them startups, paving the way from industrial food back to real food. These companies—who were carefully vetted by the show’s organizers—were all committed to making products with pure, sustainably sourced ingredients. And that’s where I found Randy.

Randy is the founder of a company called Vital Choice, which was not even on my radar. He claims to sell the cleanest fish in the universe. I tasted the samples and they were delicious and not fishy. Then I interrogated him. I’m always the devil’s advocate—all food is inherently suspect and has to earn my trust. Randy explained how his company sources the highest quality fish and I listened carefully. Then I went off and did research, evaluated the feedback of health food experts and environmental organizations, and read customer reviews. Vital Choice appears to be the real deal.

Randy was not enthusiastic about my sustainable fish. He argued that it was not sustainable. So I delved deeper and found that he was right. I have been eating a mouth-watering salmon called Loch Duarte, named for the fish farm in Scotland. It’s raised in some of the most pristine waters in the world and sold by my local co-op, which proudly displays certificates on the wall from the Marine Stewardship Council and Seafood Watch—the most respected seafood watchdogs. But, it doesn’t take a lot of digging to find dirt. Or in this case, lice. Sea lice. In huge quantities.

Yuk. I know. They are tiny crustaceans that attach themselves to salmon and feed on them, creating wounds that are susceptible to disease. The salmon either dies or is disfigured. These pests have infested salmon farms all over the world—in the US, Canada, Scotland, Norway, and Chile. A single louse grows to pea size and then lays thousands of eggs.

What to do? For many years the industry protocol was to kill lice by feeding fish a pesticide containing emamectin benzoate. But lice have become resistant to it. Fish farmers are searching for new solutions, like bathing salmon in warm water (which occasionally kills the fish, too), and breeding salmon for disease resistance. Maybe they’ll create a fish which contains an insecticide, like the Bacillus thuringiensis in your GMO corn. Who wants to play with DNA?

In the meantime, farmed fish are destroying the world’s supply of wild fish.

What else is wrong with farmed salmon?

Fish farms pollute the ocean. Fish waste and feed are disposed into the ocean in dense concentrations. This harms and sometimes destroys other marine life.

Escaped fish mate with wild fish and end up altering DNA in the wild populations. There are now farmed-salmon genes in wild Atlantic salmon. After the collapse of a fish farm in the Puget Sound that released 250,000 farmed salmon into the wild, Washington state decided to ban salmon farming.

Wasted resources. It can take more than three pounds of wild fish to feed one pound of farmed salmon. Those smaller fish can feed more people. It’s a tremendous drain on the world’s resources.

Artificial color. Why is farmed salmon that rosy color? It’s because two chemicals—astaxanthin and canthaxanthin—are added to their feed to make them pretty in pink. These compounds exist in nature as antioxidants and wild salmon get them from eating a natural diet containing krill and other crustaceans. So they are naturally pink. The synthetic versions used on fish farms have a different molecular structure and do not provide the same benefits. Also, they are fed to fish in unnaturally high concentrations. Consuming large amounts of Canthaxanthin can cause retinal damage in humans.

Contaminants. The worst fish farms have high levels of polychlorinated biphenols (PCBs), dioxins, and flame retardants, all probable carcinogens and well-documented threats to human health. Although PCBs were banned in 1979, they still persist in the environment. The more “sustainable” fish farms contain lower levels of these deadly toxins, but they are still present.

Infectious diseases. Marine Harvest, the world’s largest farmed salmon operator, listed heart and skeletal muscle inflammation (HSMI) as the third most prevalent cause of death in their 2015 annual report. The Norwegian Veterinary Institute says this infectious disease is common in fish farms. Another deadly disease—infectious salmon anemia virus (ISAV)—is spreading and has been found at fish farms worldwide.

Watch this shocking, undercover tell-all video of a fish farm in British Columbia by biologist and activist Alexandra Morton.“These fish have open sores, sea lice, blisters all over their skin and a disturbing number of them are going blind.” Marine Harvest is suing Morton for exposing them. If you want to stop these horrors, make a contribution to her GoFundMe page.

Coexistence. This is not a benefit in the marine world where one population exists naturally and the other is artificially constructed. Fish farms, unsurprisingly, take a huge toll on wild fish. This is because parasites, lice, and disease cannot be contained in netted pens submerged in a naturally occurring water source.

Lack of regulation. Most farmed fish are produced in countries with weak regulatory oversight. That means that you have no idea what they have been fed, how they’ve been raised, what diseases they’ve contracted. There’s no guarantee that they’re safe to eat.

Which farms should you avoid?

All of them, actually.

The Pew Trust, which studies and protects the environment, reported in 2006 that fish farms in Scotland had some of the highest levels of contamination. Recent research indicates that the problem is ongoing and that the Scottish government is aware of the worst farms but is protecting their reputation by keeping the documents classified. An organization called Salmon & Trout Conservation Scotland (ST&C) filed applications for disclosure and forced an involuntary show and tell.

It turns out that lice infestations are common at fish farms. The legal penalty for a high lice count is harvesting the fish early. This causes farms to lose money, so they prefer to hide lice outbreaks and they get away with because of minimal oversight. The government does not enforce their own guidelines, which mandate a reduction of fish (“culling”) at lice-infested facilities. Serial offenders are not penalized. Read more about the juicy Scottish government coverup.

According to S&TC, the worst performing companies in Scotland are: Grieg Seafood Shetland, The Scottish Salmon Company, and the one where my yummy “sustainably raised” fish comes from: Loch Duarte. Loch Duarte tried to get rid of their lice by bringing in smaller fish to eat the critters off the salmon, but it hasn’t really worked. Activist Don Staniford has put together an exposé outlining unsavory practices at Loch Duarte. 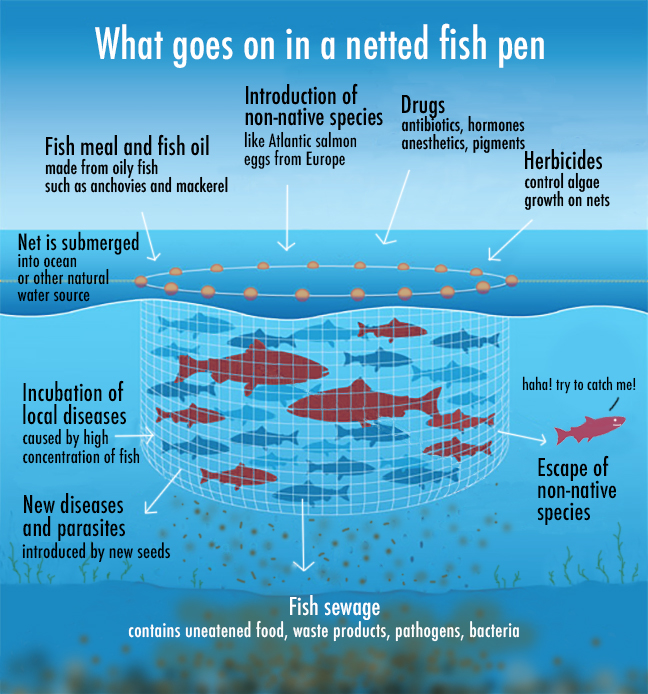 Read more about why farmed fish is not sustainable.

What would make farmed salmon sustainable?

There used to be such a place, and—surprisingly—it was close to New York City in the Hudson Valley. It was called Local Ocean. The mission was to fulfill the criteria above, and in the beginning, they had a successful operation that served New York restaurants and grocery stores. I got married nearby at the Mohonk Mountain House and drove past the facility a few years later when we returned for our anniversary. We didn’t get to tour it because it was closed, but I was excited and hoped it would revolutionize fish farming. Unfortunately, things went awry—I believe that the owners did not anticipate all the challenges inherent in a novel design like this—and they ran out of money. Perhaps someone else will jump into the market and try again.

Is there a nutritional difference? 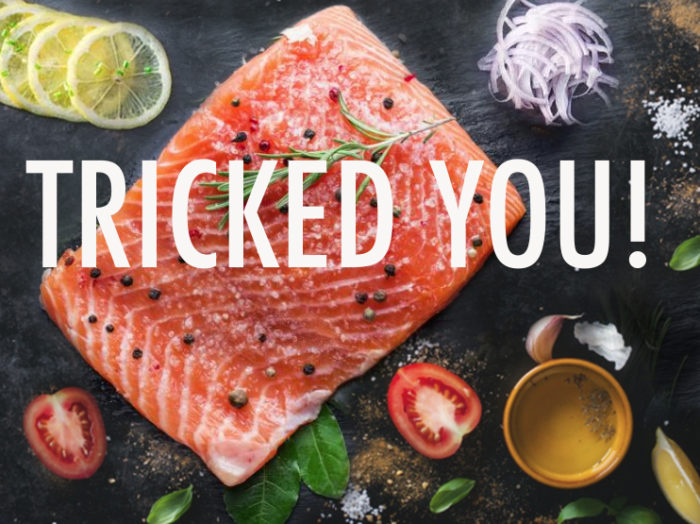 What’s so great about Vital Choice?

Many, many things. Here are the TOP TEN.

Want to try some?

Click here to start eating healthy fish. If you love it, you can get a subscription.

What other companies sell clean salmon?

I don’t know. If you find one, please post it here! If you have suggestions, I will vet them!

Decided to switch to wild? Don’t be tricked!

Here’s a fun story about Sherlock Holmes aka Randy Hartnell hot on the trail of salmon con men. It happened over 10 years ago, but apparently the practice still continues today. The question is: are restaurants and grocers deliberately mis-marking fish for profit, or are they being duped by their suppliers? Who is conning whom? What do you think?

It’s a huge cover-up! Watch this fascinating film about the Canadian government silencing scientists and even laboratories. Salmon disease is a well-guarded federal secret; the government is afraid that acknowledging the extent of the deadly viruses in the country’s fish farms will damage international trade, that the Canadian borders will be closed to trade with China and the United States. So the epidemic of sick and dying fish keeps growing. The saga is ongoing but the movie ends with a surprising twist. Spoiler: the people take charge.

Note: Good Food Fighter is not a third party affiliate for Vital Choice and receives no direct financial benefit or kickback for providing this recommendation.