My kid has a friend who eats whatever he likes for breakfast.

He likes processed carbs. Tons and tons of them, preferably with lots of processed sugar. Cereal is usually on the breakfast table along with bread and jam, accompanied by orange juice.

Many parents are content just to have kids make their own breakfast without thinking too much about what’s on the menu. We hope it’s reasonably healthy—heck, it seems like “real food”. We’re all pressed for time and compromises need to be made. But is there any nutritional benefit? Could breakfast be hurting them?

The Environmental Working Group created a “Hall of Shame” for cereals that are over 50% sugar by weight. Leading the pack is Kellogg’s Honey Smacks with more sugar than a Hostess Twinkie. Competing for most sugar are Post Golden Crisp and General Mills Wheaties. Honey Nut Cheerios contains more sugar than three Chips Ahoy! chocolate chip cookies…

How much sugar is that? Well, put on your seat belt and let’s go for a ride down cereal lane.

The Nutrition Facts label on the Corn Pops says the serving size is 1 1/3 cups. That’s a strange number. Is that how much kids typically eat? Was the serving size reduced from 2 cups to bring down the sugar rating? Your kid might still eat two cups. They’re probably not measuring out the cereal, but you can: watch how much they take and then pour it into a measuring cup. How much sugar is in there? Probably more than you thought…

But guess what? Sugar is not the only sugary ingredient.

According to the University of California at San Francisco, added sugar is hiding in 74% of packaged foods. It often flies under the radar because it is masquerading as sugar euphemisms, like barley malt syrup, cane juice, dextrose, glucose solids, maltodextrin, palm sugar, rice syrup…the list goes on and on. Want to see all 61 names for sugar?

Do your kids love bread? Could it be that it’s loaded with sugar? Let’s have a look:

Let’s do a comparison. Here are two of my favorite desserts:

As you can see, many cereals are basically dessert. Even those that don’t contain added sugar and even those that say “whole wheat” are made of hyper-processed carbs and are sky-high on the glycemic index, meaning that they spike blood sugar just as (or more than) a typical dessert would.

The scary reality is that many kids are already over their daily maximum of sugar intake by the time they leave the house in the morning! The American Heart Association (AHA) recommends no more than 25g sugar per day for kids. Nutritionists argue that the safe amount of sugar for children is actually much, much lower—after all, added sugars provide zero benefit to your body, and the list of harms is long and growing.

Unsuspecting consumers are understandably confused by deceptive nutrition claims on packages like “no fat” or “all natural”. Research shows that high carb foods and sugar make you fat, whereas high-fat food does not (unless it is accompanied by sugar, like in a donut). The term “natural” is not regulated so companies use it recklessly without having to prove anything. Don’t pay any attention to callouts on packaging. Just read the nutrition label.

Remember that if your kid is eating in a cafeteria for lunch, there will most likely be chocolate milk and cookies or popsicles on the menu, and so they could be sugared up to the tune of another 80g. (Stay tuned for me to dissect the ingredient label from a leading popsicle).

If they play sports, your kids are probably exposed to an avalanche of junkfood at events. A friend told me she was at a game last week where the only snacks available, for sale, were pop tarts  (29g sugar per serving), goldfish, “fruit” gummies (22g sugar per large bag), and fruit juice packs. Yikes! Did you think fruit juice was healthy? Check these numbers:

Recently, my kid and his friends walked to Randalls grocery after school for a snack. Cakes and sugary snacks abound there, but one kid decided to opt for something healthy…a bottled smoothie. My kid was suspicious—as I’ve taught him to be—and he checked out the nutrition facts. He was surprised—but not really that surprised—to see this:

Yes, you read that right: 61g sugar, which is almost three times the suggested daily limit for kids, all in one drink. 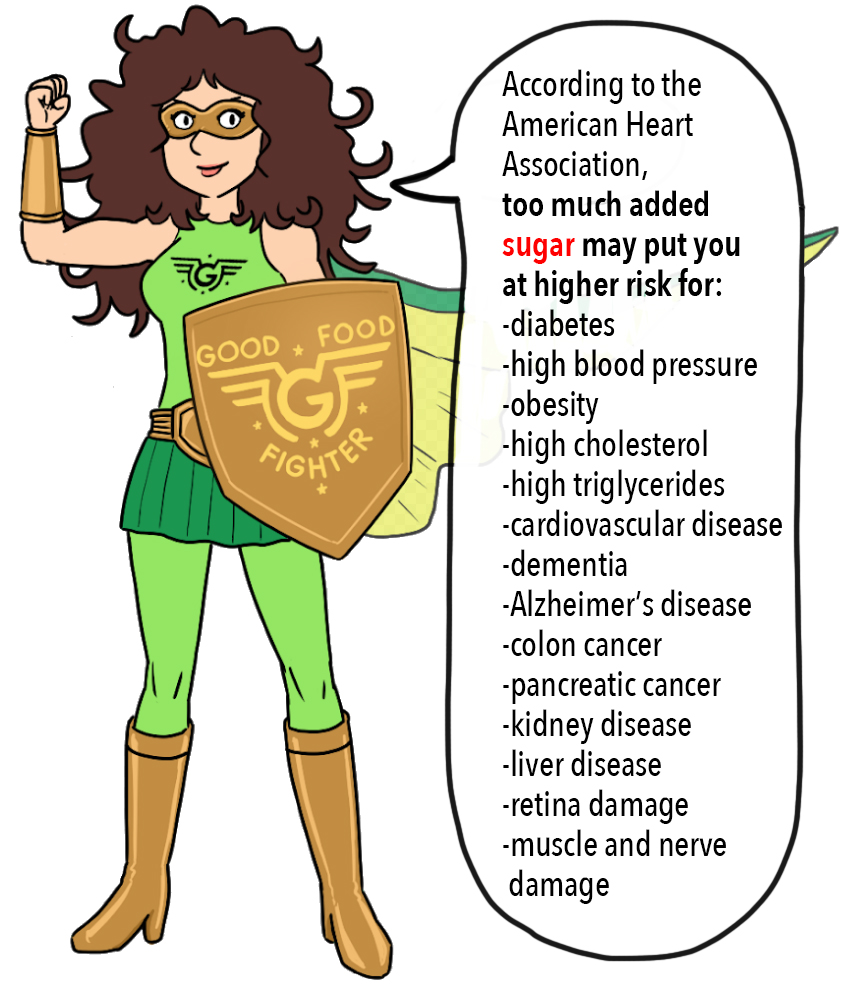 The Good Food Fighter wants to change this sugar culture, and it all starts with awareness. Parents can start the conversation about the dangers of sugary food in small groups or in school forums. You can reach out to the organizers of events, educators, and principals with links to information, like this article. Share your health concerns and make suggestions. Change starts with one person. A handful of dedicated moms can start a movement. You can change the trajectory of your kid’s life, to set them up for success, good habits, a healthy body.

Breakfast is now over and if your kid had a bowl of cereal and a slice of bread and some fruit juice, he may have 90g of sugar in his body. That’s over three times what the American Heart Association recommends for kids, and it’s only 9am…

You can have an immediate impact if you send your kids out the door with a nourishing breakfast in their tummy. You will be helping them maintain stable blood sugar, more energy, improved concentration at school, a better mood and calmer behavior.

Nutritious food is yummy! And kids’ taste buds can adapt. My kid’s friend is actually an adventurous eater and just needs the temptations removed. His mom has been reading my blog and recently eliminated some of the worst offenders 😀. If you don’t buy sugary food, it’s not there for your kid to eat! Fear not, they won’t starve! They’ll eat what is available when they get hungry. So buy the things you want them to eat, coax them into the kitchen to have fun cooking, and look for ways to make food appealing! (Your GFF has a feast of ideas!)

Here are my three favorite breakfasts!

Not yet subscribed? I bring my readers valuable life-changing tips in bi-monthly posts that are fun, informative, and often contain comics, memes, or other fun stuff!

I am here for you. Ask anything. I will give you all the tips and resources I can.