Have you ever loved a product, and then it changed and you didn’t like it anymore? This happens all the time as manufacturers try to increase profits by finding cheaper ingredients. A classic example is replacing sugar with high fructose corn syrup. This happened to my favorite drink 20 years ago, and I fought back.

How do you fight a food manufacturer?

Well, first you ask nicely. In a letter.

If that doesn’t work, you can make comments on social media.

If that doesn’t work, you can start a petition. Criticism in a public forum will get the company’s attention. They don’t want bad publicity, and if they’re using poor quality or toxic ingredients, they don’t want anyone to notice. So don’t be afraid to speak up. Loudly. 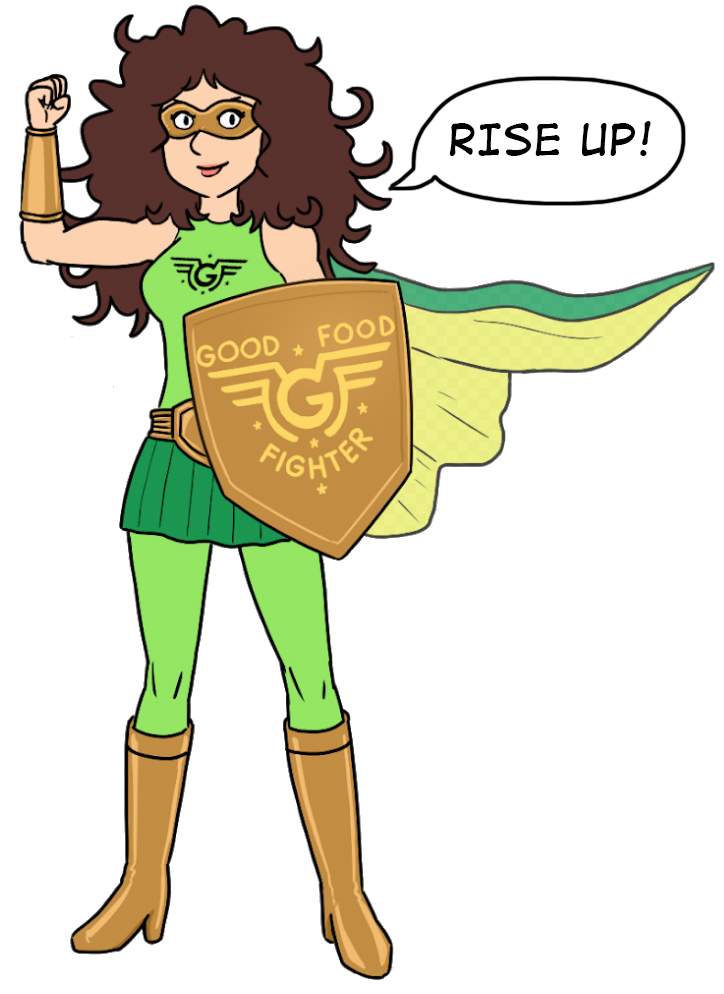 Here is my complaint letter from 1999 (retyped from the hard copy with new comments in red).

I am writing to express my profound disappointment over your decision to add fructose and corn syrup to your Juice Squeeze beverages.

I am originally from the East Coast and began drinking Juice Squeeze when I moved to Pasadena in 1990 and started shopping at Trader Joe’s. Being a health conscious consumer (or so I thought), I was pleased to find a delicious, thirst-quenching, conveniently-packaged carbonated juice drink with only the purest ingredients. I have been drinking about four bottles a day since that time (almost 10 years). (Holy cow, that’s 800 calories just from juice! A nutritionist later pointed out that I was consuming nearly half of my daily allotment of calories in liquid and that I couldn’t afford to do so.)  I even pack them along when I travel (Those good old days when you could carry drinks through security ended two years later.).

I was unhappy to discover about six weeks ago that the ingredient list had been altered and the packaging inconspicuously changed to reflect this. I bought the remaining six cases in the store of the original juice, distinguishable only by the words ”sweetened with fruit juice” in place of “all natural” (when you notice new packaging, be sure to check the ingredient list for changes). In the checkout line I informed another shopper with Juice Squeeze in her cart of the change and she immediately returned the 4-packs to the shelf. (Yes! This really happened). My cashier was drinking one, and I asked whether she was aware of the change. (Yes, I really did.) She was not and remarked that the news had ruined her evening, that she had been a loyal fan for years. Since that evening, I have routinely queried friends and associates who drink Juice Squeeze about the change. Predictably, they have a reaction similar to my own, claiming that they chose Juice Squeeze because it didn’t contain sugar (I now know that fructose is a form of sugar, and that sugar can be destructive in all forms; plus, fructose is metabolized by the liver and linked to non-alchoholic fatty liver disease and cardiovascular disease).

Although the caloric intake and fruit serving may be equivalent in both formulas, the quality of Juice Squeeze has clearly been compromised. I now feel compelled to search for another juice beverage (note: drink filtered water instead!), one that will meet my nutritional and health needs and tastes. I sincerely hope that Crystal Geyser will reconsider its decision and return to the original formula; the original Juice Squeeze would be preferable, even at an increased price, to the new, lower quality one (most preferable = water).

A personal response would be appreciated (I have already seen your form letter).

Thank you for your time,

Here’s is the original letter. It was sleeping in an old and forgotten folder. 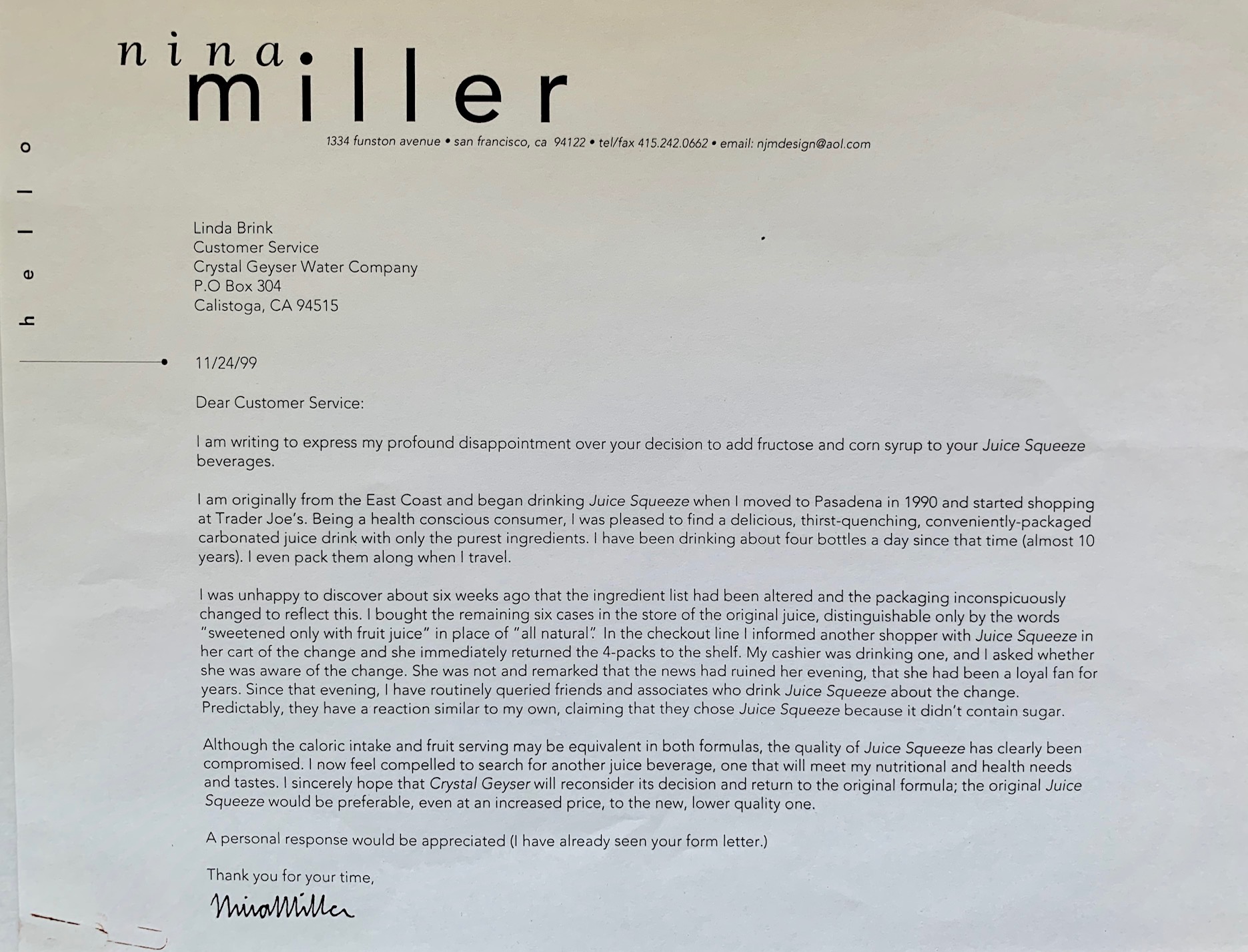 I guess I was a rabble-rouser even back then. The Food Fighter seeds were planted long ago…

Crystal Geyser ended up switching back to the old formula. My guess is that I wasn’t the only one who kicked up a fuss. Most of us complain to friends when we don’t like something but we rarely think to compose a letter and send it off to the culprit. I know, letters take time and energy. But you may end up getting what you want. It’s well worth your while if you feel strongly about something.

Letters hold enormous weight with companies because they don’t get many. And they know that a single unhappy customer means that there are many more. According to this article, 96% of unhappy customers won’t complain to the company but will tell 15 friends. And most of them will stop buying the product or service. Companies want to avoid that. Like the plague.

Feel free to use my letter as a stating point. Obviously email is quicker and more convenient.You can usually find all the info you need online, but you may need to hunt around or call the main number. A snail letter may carry more weight because the time investment of the customer is higher.

I’ve written letters to companies all my life—I have at least 20—and nearly all of them have accomplished their desired goal. To ensure that the letter isn’t ignored, I typically copy several people—customer service, the CEO, other executives, board members, my mother (jk). I like to make a splash. If someone gets a letter and realizes that 5 other people have it, it’s harder to toss in the trash can.

Why I laugh and cry while rereading this letter

The funny thing is that the original product, which I loved and thought was nutritious back then, is now on my hit list. I didn’t know then what I know now. Like most people, and lots of parents, I believed that a drink made from fruit was as healthy as eating a piece of fruit. This couldn’t be farther from the truth, because:

The moral of the story (there are two):