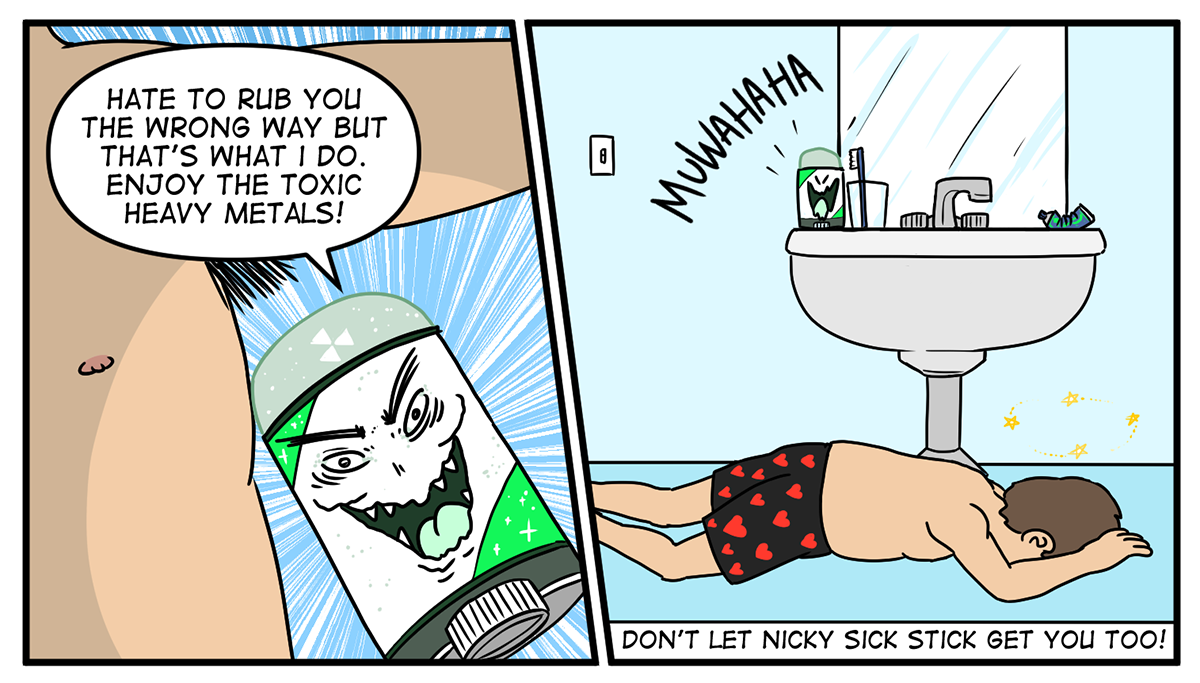 I am the sweatiest person in the world. When I go for a power walk around the neighborhood I return cascading with sweat and leave a trail of drips all the way to the shower. My husband, by contrast, will go for a bike ride in the heat of the summer, return to work, sleep in his clothes that night, go to work the next day, and take a shower three days later. That’s right, he doesn’t smell at all. Pretty cool DNA I say. Anyway, back to me.

Over a decade ago I slowly began removing toxic chemicals from my life: I embraced organic food, non-toxic household cleaners, herbal-extract shampoos, natural toothpaste and hand soap. But I was terrified to let go of the only thing separating me from my distant cousin, the pig: Arrid Extra Dry Antiperspirant. I was using the heavy duty spray version so I got double chemical exposure: through my pores and my lungs. Check out this delightful commercial from 1984. Clearly, this is how everyone met before online dating. As if.

Anyway, after many health adventures, which I will blog about at a later date, I realized it was time to shed my trusty toxic deodorant, so I began the quest to find a replacement that would allow me to socialize without people passing out or running away from me. It was a long and winding road. Many deodorants sweated off within an hour and I had to apply them all day long.

What’s a superhero to do?

I can’t wait to tell you, but first I want to explain why you smell and where deodorant came from.

Where does body odor come from?

Literally, it comes from your sweat glands. But sweat itself actually doesn’t smell. Body odor comes from by-products of the bacteria that feed on sweat. And several other factors contribute to how much you smell:

what you eat. A diet heavy in animal meat and fat will produce a different scent than a vegetarian diet. Garlic, onions, caffeine, and alcohol will likely make your sweat smell stronger. As will broccoli, cauliflower, and cabbage because they contain a lot of sulfur. Eating leafy greens will probably take the smell down a notch. Try adding or eliminating foods to reduce your odor.

anxiety. Anxiety releases cortisol—the fight-or-flight hormone—in your body. This triggers your sweat glands. The degree of anxiety is usually correlated with the physical symptoms and sensations, like perspiration. When combined with the bacteria under your arms, your sweat starts to smell.

the clothes you wear. The chemicals in synthetic fibers like polyester and rayon tend to make your sweat smell more. Most clothing these days are made from cheap material and are loaded with chemicals, like the ones used to make wrinkle-free fabric. All these chemicals react with your skin and cause stink. In general, the best materials are the made from natural fibers: hemp, linen, wool, and silk. Many of these are naturally antibacterial and release moisture away from your skin. Believe it or not, 100% cotton is not a good choice because it swells to retain moisture. According to this report from Scientific American, microbes like Micrococcus grow abundantly on polyester and other synthetic fabrics.

the deodorant you use. Whatever goes on your armpits influences its microbiome. Chemicals in your antiperspirant, especially aluminum, can lead to an overgrowth of bad bacteria, such as Actinobacteria, in your armpits. The aluminum compounds tend to kill off the less smelly bacteria, allowing more foul-smelling bacteria to thrive.

the bacteria in your armpit. Populations of Corynebacterium jeikeium tend to reside in the armpits of men, whereas Staphylococcus haemolyticus is more common in women. This causes a rancid cheese-like smell in male armpits and a more fruity, onion-like smell in female armpits. Cool, eh?

Back to sweat glands, your favorite topic.

There are two different kinds.

Eccrine glands are coiled up just beneath the surface of your skin, all over your body. Sweat produced by these glands is salty so it’s not broken down easily and doesn’t smell.

Apocrine glands release sweat when your body temperature rises or when you’re under stress. This sweat is smelly because it is high in protein. The apocrine glands empty into hair follicles. Can you guess where?

Not sure about you, but I don’t have any hair in my eyeballs. So C.

You have about three million sweat glands. Don’t bother counting them though, because they’re under your skin.

Daily showering and excessive use of soaps and shampoos, especially anti-bacterial ones, can wipe out all your good bacteria! In an armpit undefended by good bacteria, the smelly ones easily take over and produce body odor. Who knew?

Time for some Trivia

When was the first trademarked deodorant unveiled?

Actually this is a trick question because none of the answers are right. But (d) is the closest. The inventor is unknown.

So what’s wrong with anti-perspirant?

That’s right: Conventional deodorants are often antiperspirants. This means “against perspiring”, because they actually prevent sweating. Sweating is your built-in air conditioning system. Your body releases water on your skin and it evaporates so that you can cool down. It’s an efficient way of releasing heat and regulating your body temperature. It is also a cleansing process that removes toxins from your body. According to a study  from the National Institutes of Health, sweat is an “acknowledged excretory route for toxic metals”. Anti-perspirants plug your sweat ducts which interferes with your body’s natural processes and can lead to infections and other problems.

Really? Yes, really. Here they are:

aluminum compounds (aluminum chlorohydrate and aluminum zirconium). These are used to block sweat. Studies show that this metal is absorbed through your pores and ends up in breast tissue, causing abnormalities that could play a role in the development of breast cancer. Some research shows a link between aluminum and Alzheimer’s Disease.

parabens. These are used as preservatives and also to prevent the growth of mold, yeast, and bacteria. They mimic estrogen in the body, interfere with hormones and can cause reproductive harm. They are also linked to breast and prostrate cancer. Parabens appear in ingredient names such as: Methylparaben, propylparaben, methyl 4-hydroxybenzoate and propyl 4-hydroxylbenzoate.

steareths. They are used as emulsifiers (agents used to combine ingredients), or as a thickeners. Steareths are made by combining stearic acid with ethylene oxide, which is a known carcinogen. They are linked to skin allergies, developmental toxicity, and cancer.

triclosan. This is a antimicrobial that prevents bacterial and fungal growth. It was originally formulated to be a pesticide. And when combined with chlorinated water it can become a carcinogenic gas called chloroform. Triclosan is an endocrine disruptor which has been shown to interfere with thyroid hormones. It can lead to early puberty, infertility, impaired learning, compromised muscle function, obesity, and cancer. Due to overwhelming evidence of harm to human health, the FDA finally banned it from soap last year. But it still turns up in other products.

propylene glycol. Used as a humectant (keeps substances from drying out), this chemical was originally developed as an antifreeze. This chemical is a skin irritant but can also cause seizures and damage to your central nervous system, heart, and liver.

TEA and DEA. These are emulsifiers but are also used as corrosion inhibitors in airplane engine coolant and antifreeze. Prolonged use can lead to organ system toxicity and liver cancer. The European Commission has banned them from personal care products.

phthalates. These chemicals helps deodorants spread smoothly. They are endocrine disruptors and are linked to breast, prostrate, and ovarian cancer.  They can cause liver, lung, and kidney damage. They can reduce sperm count and cause infertility. Phthalates are usually recognizable in a list of ingredients as a series of letters, such as BBP, DEP, DiNP. They are also hidden under the term “fragrance”.

talc. Sounds innocent enough. But some talc is contaminated with asbestos.

artificial colors. These synthetic dyes come mostly from coal tar and cause a range of health problems. They have slowly been eliminated by the FDA because of recurrent adverse health effects in the public. Some cause allergic skin reactions, others lead to hyperactivity and some are known carcinogens.

fragrance. Sounds harmless but it’s not. Manufacturers are not required to list what they are, and this “one” ingredient is an umbrella for dozens of chemicals, like:

Even deodorants labeled “natural” contain many of these ingredients because this term is not regulated by the FDA. Manufacturers can claim that anything is “natural”. Do you want this stuff in your body?

How does yours rank?

One of my favorite non-profits, the Environmental Working Group, created a database of skin products and the individual chemicals found in skin products. They evaluate and rate each based on the latest research. They have a handy app which allows you to scan a product’s bar code and see how safe or toxic it is on a scale of 0 to 10. You want your product to be green! If your product is not yet in their system, you can type the ingredients individually. Here it is.

To save you the trouble, I am providing a list of some of the worse offenders, according to the Environmental Working Group‘s database. These brands contain a combination of possible carcinogens, petroleum, endocrine disruptors, and chemical fragrances:

Keep in mind that some of these brands may have safer versions, including the ones you’re using. So best to do your own quick search to verify.

So what does the Good Food Fighter use? After all I need to be charming, powerful, and effective…

Stay tuned for next week’s post to find out: