What a strange question. That’s why I asked it.

Apples seem so innocent, but they actually contain lots of hidden ingredients.

Let’s look at five of my favorites:

The CDC reports that there are approximately 29 pesticides in an American’s body. Do you want more? I want less.

Check out this well designed chart that explains toxicity levels for a huge range of food—maybe something fun to do at the dinner table if someone comes with a device. Consumer Reports offers a nifty feature where you can see a color-coded level of risk and the countries that produce safe or unsafe produce.

The Environmental Working Group provides a cheat sheet listing the most heavily sprayed fruits and veggies so that you can avoid them. This guide is updated every year to reflect current agricultural practices and chemicals.

Should I avoid apples?

Apples are one of nature’s perfect foods—high in fiber and vitamin C and packed with polyphenols, a type of antioxidant. Half of their vitamin C content is right under the skin and most of the polyphenols are found in the skin, so don’t peel it! Apples contain insoluble fiber—great for digestion—and soluble fiber, which attacks the cholesterol build up in the arteries, thus helping to prevent artherosclerosis and  cardiovascular disease. Also, big apple eaters have a lower risk of stroke due to a compound called quercetin. One study even showed a correlation between apple-eating and a lower risk of lung cancer. Apples are also filling, so eating a lot of them can help you lose weight. What’s not to love?

Pesticides are not to love, Buy organic or grow your own. 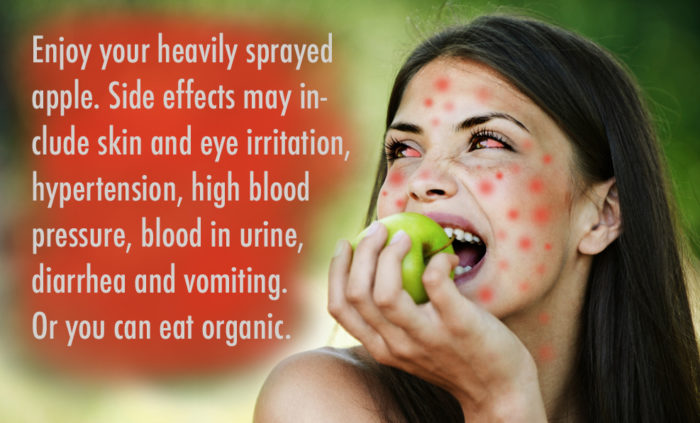 I met a woman at Comic Con who was interested in my crusade to save the world one ingredient at a time. We started talking about health and she told me that she breaks out in hives all the time and was completely stumped. I remarked that pesticide residue on conventional fruit could be the cause. She lamented that organic was so expensive and then added that she eats tons of apples. AHA! I pointed out that apples are one of the most heavily sprayed fruits and that she should try eating organic for just three weeks to see if it helps. It could be anything, but pesticides do cause all kinds of allergic reactions.

Will washing get the crap off?

Unfortunately, pesticides are not water soluble–otherwise farmers would need to reapply after every rain or dew. Rinsing (while scrubbing with a brush) will somewhat reduce the residue on the surface but not the pesticides that are absorbed by the roots into the flesh of fruits and vegetables. And waxes that are added to make them shiny and pretty actually seal in the pesticides. Commercial veggie wash has not proven to be any more effective than water, and the detergent can get absorbed by the fruits’s pores.

If you’re going to buy conventional apples (which I strongly discourage), you should soak and scrub them in a baking soda mixture. A study in the Journal of Agricultural and Food Chemistry found that a mixture of sodium bicarbonate and water worked better than water and scrubbing. If you let apples soak in a bowl with water and baking soda for eight minutes, some pesticides will start to dissolve. However, not all pesticides react with this mixture, so it will only reduce—but not eliminate—your pesticide load.

Did my grandparents eat 47 chemicals with every bite?

No, they ate one especially delicious poison—DDT. Actually it depends on when they were born and where. If your grandparents lived through medieval times 😉, they probably ate some tasty arsenic and lead with their produce. In the 19th century there was a movement towards using compounds from vegetable roots as well as chrysanthemums (natural doesn’t mean non-toxic). In the 1930s DDT was discovered and in the 1940s became the most widely used insecticide in the world. Then people figured out that it was devastating to human health and it was banned by 68 countries in the 1960s.

Towards the end of WW II German industrial/chemical secrets were discovered by Allied troops. Research that produced nerve agents was then repurposed to agriculture where organophosphates were developed, like the soil fumigant DD and the insecticides parathion and malathion. Munitions plants which had stockpiles of ammonium nitrate were converted into fertilizer factories. These chemicals were known to be toxic, but studies on humans were not yet available, and a national enthusiasm for scientific progress blinded people to their dangers. In the 1950s industrial growing practices (like monoculture, which depletes the soil of nutrients) were introduced and ushered in the era of modern pesticide use and genetic engineering. Since then, thousands of chemicals have been approved for use without any formal testing process, as the FDA defers to the industry to self-regulate. There are currently 350,000 pesticides registered in the U.S. 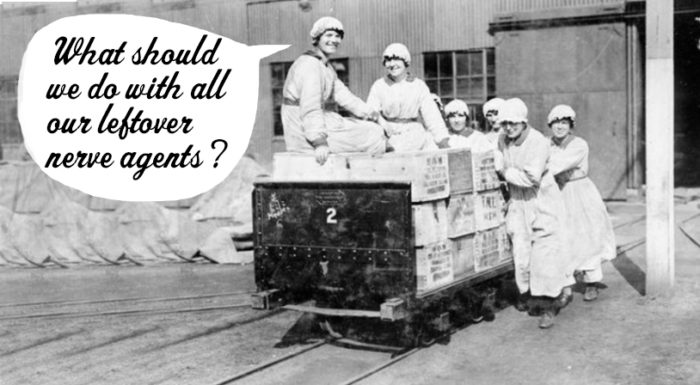 Do these chemicals impact the environment?

Yes. They are responsible for great disruption to the animal kingdom including loss of biodiversity and elimination of important species, like bees. Also, they have created a monster: pest resistance, spurring the development and use of increasingly dangerous and destructive pesticides. After use, some pesticides decompose quickly with the help of microbes and some persist in the environment. But they don’t disappear when they degrade; they form new chemicals that may be more or less toxic than the original chemical. Pesticides have made their way into our soil and water, onto our food, into our blood, and into our mothers’ milk. 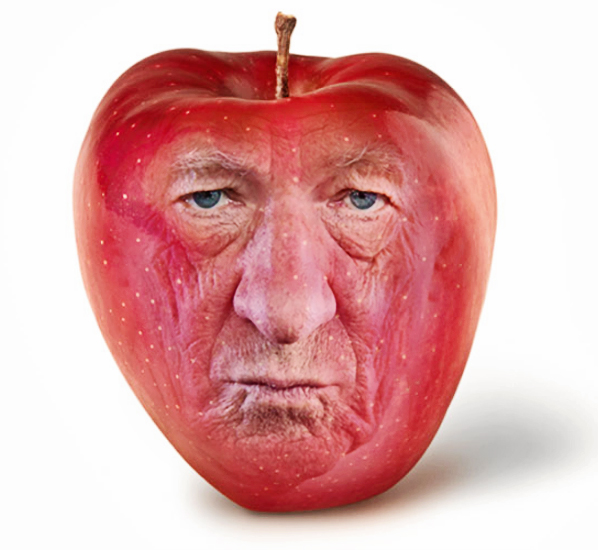 Incidentally, you are eating old apples.

Yep, its’ true, from the mouth of the USDA. Apples are picked in the summer before they are ripe and treated with 1-methylcyclopropene, waxed to lock it in, then boxed and stored on pallets in cold warehouses for up to a year. They are dubbed “birthday apples” by the industry because they are usually sold on their first birthday.

Storing at low temperatures, with low levels of oxygen and high levels of carbon dioxide slows the apples’ release of ethylene. Still, fungicides are often used to prevent fungal rotting. Since “SmartFresh,” 1-MCP appeared on the market 15 years ago, fungicides are less common.

The author of Brandwashed: Tricks Companies Use to Manipulate Our Minds and Persuade Us to Buy claims that your average supermarket apple is 14 months old.

Does it really matter? Isn’t an apple just an apple?

The Death of Nutrition

According to this study, antioxidant activity in apples gradually drops off after three months of storage in the cold. An apple stored for nearly a year? Probably not worth eating. This holds true for most vegetables and fruits: the less fresh they are, the less nutrients they contain.

Have fun with apples. They are really versatile and work in all kinds of dishes. The more apple, the merrier, and don’t forget that it keeps the doctor away 🙂 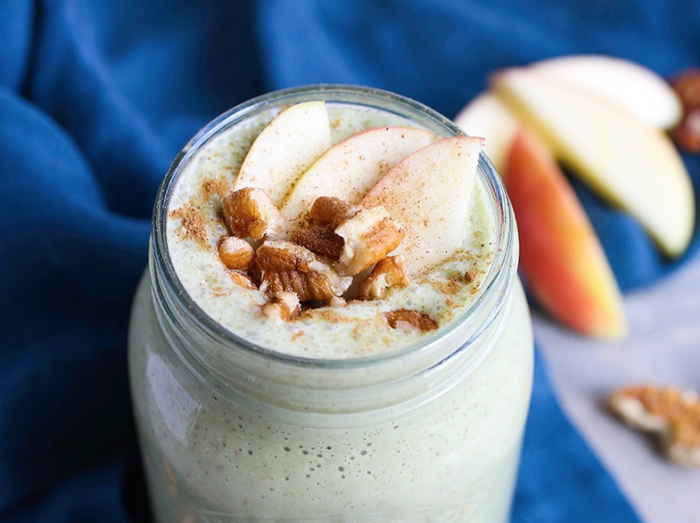 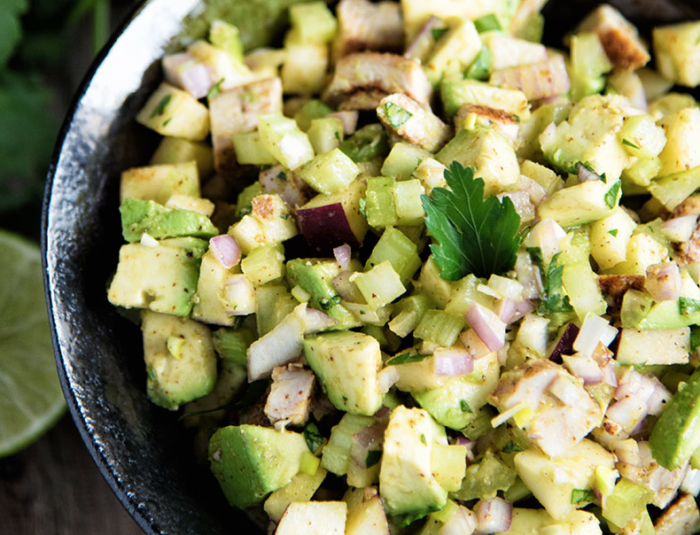 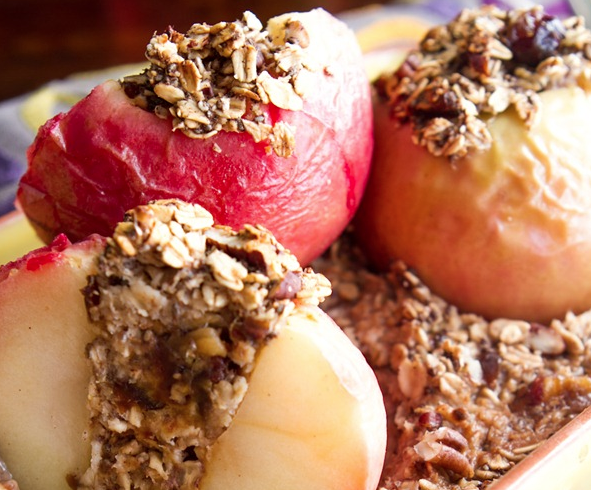 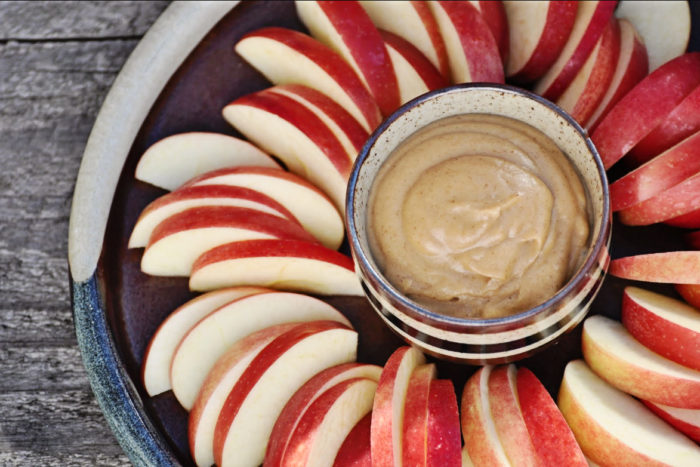 Apples are fascinating. Did you know that there are 2500 varieties grown in the United States? Only 100 kinds are grown commercially, but that’s still a bushel-load!

The old saying, “An apple a day, keeps the doctor away.” comes from an old English adage, “To eat an apple before going to bed, will make the doctor beg his bread.” Much more eloquent—let’s start saying that!

Check out this surprising apple trivia.