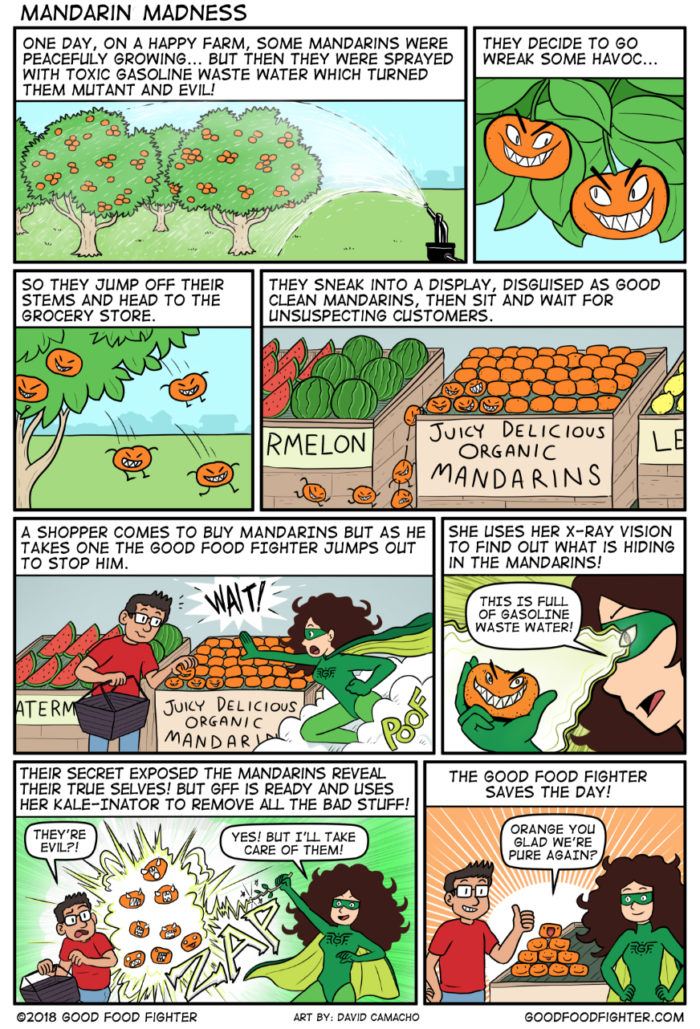 The companies who currently sell the wastewater that is used to irrigate crops have documented the use of over a hundred chemicals. Almost half are considered “trade secrets” and are thereby protected from disclosure. But the other half have been identified, and at least a handful are known or suspected to cause cancer, according to the World Health Organization, the EPA, the Prop 65 list (California Environmental Protection Agency’s list of chemicals known to the state to cause cancer or reproductive toxicity), and the Clean Air Act.

Many others are harmful to animals, and many more have never been tested. We get to be the guinea pigs!

Where is the GFF and her kale-inator when I need her? How do I know which oranges are affected?

The GFF is busy doing research and her kale-inator is recharging but here’s what to avoid if you don’t like ingesting wastewater:

Find a list of food that could be tainted here.

In May 2015 The Los Angeles Times reported that every day Chevron sells 21 million gallons of treated oilfield wastewater to farmers in central California. It’s used to irrigate about 45,000 acres of crops. We know that four districts in California Central valley irrigate with wastewater and we know their names. But it’s hard to draw a line from the produce that leaves those farms to an item at your local store. It’s a long journey and the produce passes through many wholesalers and other channels. Until we are able to identify which items are tainted, I am going to avoid California citrus. Which is hard to do because so much of our food comes from there: my co-op carries 7 different kinds of citrus from California and only one from Texas; that’s the one I buy.

Why isn’t this stuff tested?

Believe it or not, irrigating with wastewater has been going on, without consequence, since the mid 1990’s. The practice has recently expanded which is why it’s attracting attention and being challenged. But questionable practices like this are nothing new in American agribusiness where the industry standard is: “do whatever is most profitable, and don’t consider potential harm unless the FDA forces you to or consumers raise Hell”.

Studies have been done to assess not only the potential harm to humans, but also to animals and the environment. But they don’t always make headlines. This 2016 study (Preliminary Hazard Assessment of Chemical Additives Used in Oil and Gas Fields that Reuse Their Produced Water for Agricultural Irrigation in The San Joaquin Valley of California) tested 173 chemicals used in wastewater irrigation and documented “acute mammalian and ecological toxicities, biodegradability, bioaccumulation potential, and carcinogenicity”. According to the authors, five chemicals were classified as an acute threat to mammals and 36% were classified as extremely toxic to aquatic environments. Their report shows that many chemicals in gasoline wastewater, (known by the euphemism “produced water”) are classified as known toxins by a range of respected agencies and organizations:

Photographer Alex Sandberg has documented the oil fields and fracking rigs, farmlands, crops, livestock and animal carcasses, untreated oil wastewater canals and large unlined toxic wastewater pits. He calls the water “a toxic mix of radioactive and carcinogenic byproducts of the oil drilling process”. A resident of the area explained that animals often find their way past barbed wire fences into the canals to drink water, after which they proceed to drop dead on its banks. See the landscape that this system generates.

To find out the whole story, check out my previous article on wastewater mandarins. Also, an Austin-based advocacy organization called Food & Water Watch has extensively covered this issue and created a petition to help end this disgusting practice. They recently filed a lawsuit against the company —the not-so Wonderful Company—which grows these mandarins. We hope—with your help—to make this practice illegal.

Who is Mr. Wonderful?

He is the largest and most powerful farmer in America. He controls entire towns and is instrumental in shaping what Americans eat. He and his wife almost single handedly created the pomegranate juice craze. Read all about the little-known titan who presides over a 4.5 billion privately held empire.

What happens when you expose a company for unethical products or practices?

They sue you. Check out how Corporate America deals with consumer advocates and watchdog organizations.

If you would prefer eating and feeding your kids fruit that is not spiked with gasoline drilling chemicals, please sign this petition. It’ll only take 5 seconds, and if all of you do it, it will make a difference.

Want clean air and water but don’t have time to fight for it? Help those who are doing it for you.

Get the word out

Share this article far and wide. Trust me, social media has power, and outrage fuels change!