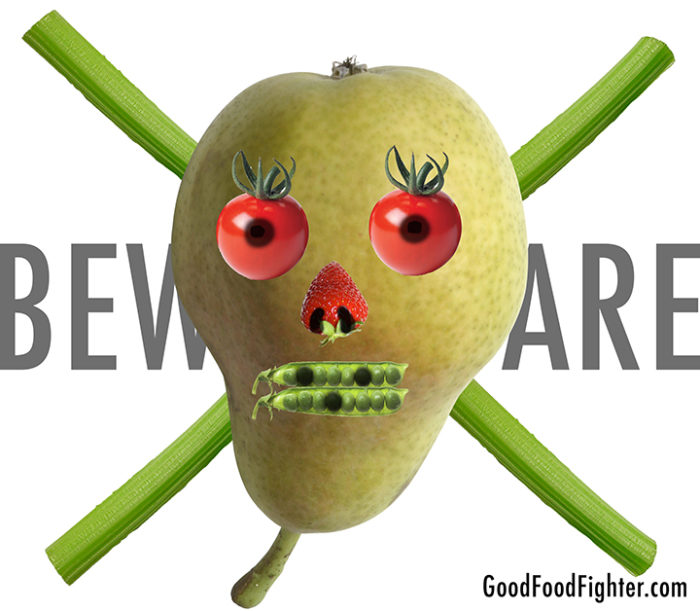 Yes, they look luscious and all, but these vibrant, colorful fruits are laced with a myriad of chemicals linked to all kinds of vibrant and colorful diseases. Here they are:

The list actually goes on and on, but I bring you the most evil culprits. These, my friends, should be bought organic, or not at all. Especially if they are going into little bodies.

And now…drumroll… I’m going to share a list of produce that will NOT kill you (at least not immediately) if you buy conventional. This does not mean free sailing, it’s just the pesticide levels are lower.

These lists and data come from the much esteemed and unbiased Environmental Working Group. This non-profit organization is an amazing resource and its website is sure to entertain for hours on end, as you investigate your skin creams and sunscreens for toxicity levels.

But back to food: you can test the healthiness of 80,000 foods at this impressive link. It ranks nutrition, ingredients, and processing. Disclaimer: I agree with everything except for their disdain for saturated fat; they ding saturated fat, not distinguishing between the real-food variety (like butter), and processed crap. A good rule-of-thumb: if it’s a whole food, it’s good and necessary, and if it’s processed in a factory and packaged, it’s usually not.

Also, any product that hides its ingredients under the mysterious term fragrance will be heavily penalized by the point chart. That’s because it sounds benign and usually is not. Almost anything can masquerade as a fragrance, just like anything (including MSG) can masquerade as a natural flavor in food. You like your food unregulated? Or faux-regulated by FDA officials who bend to the will of special interests? That’s what you get. So beware of unnamed fragrances and unnamed natural flavors.

Anyway, if you install the free app for your phone, you can scan barcodes right at the supermarket and make good, informed decisions while you shop!

And if you carry the convenient card-sized chart that the EWG will email you as a special gift for signing up, you can refer to that every time you shop. Remember that pesticide application is a moving target, so you’ll need to check back every season for the worst offenders. The EWG claims that about 80 % of your pesticide load comes from just 12 nasty fruits and vegetables. And now you know how to avoid them.