Every wonder what to do with this big black behemoth? 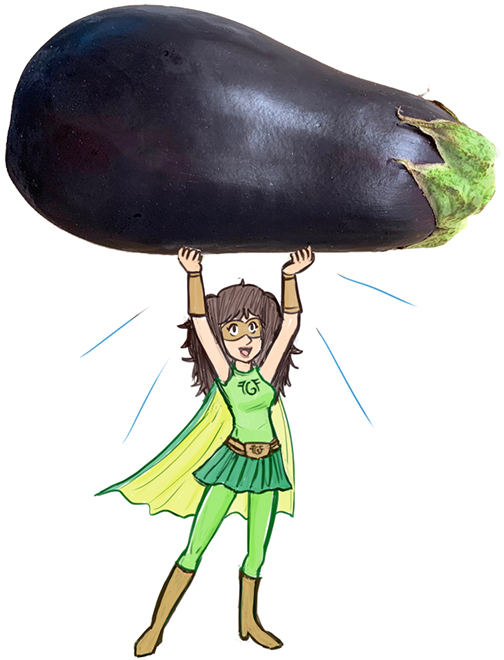 So did I. In fact, one time when a few showed up in my weekly farmshare, I left them in the fridge till they were wrinkly and then had to toss them. I just didn’t know what to do with them.

Most of us are only familiar with the skinny purple version that often appears in Chinese cuisine. That one seems less intimidating and easier to stir-fry…if we’re even willing to venture into Eggplantland.

And then three big scary eggplants arrived in my farmshare this week. I panicked,  “Oh no!, what will I do with them? Who understands eggplant?”, I wondered. And then I realized that I had an eggplant connection….

The connection is Bulgaria, a tiny country in the Balkans where there lived long ago the great grandmother of a good friend. Eggplant is the national vegetable of Bulgaria. But this particular dish actually hails from Spain, probably dating back to the 15th century. When Jews were expelled, following the Inquisition, they dispersed throughout the Balkan countries (formerly part of the Ottoman Empire) now known as Turkey, Greece, Romania, Bulgaria, Bosnia, Serbia, and Herzegovina.

These Jews, called Sephardim, took with them this beloved eggplant dish which they continued to make for centuries. It is called Fritikas di Miringena in Ladino, the language of Spanish Jews. The Spanish word for eggplant is Berenjena so you can see traces of the origin.

This very popular recipe was passed down from great grandmother to grandmother to mother to my friend, so it is very old, and deeply treasured. And to ensure that it is never lost, I give it to you.

I made an adjustment or two to make it a smidgen healthier, and here it is: 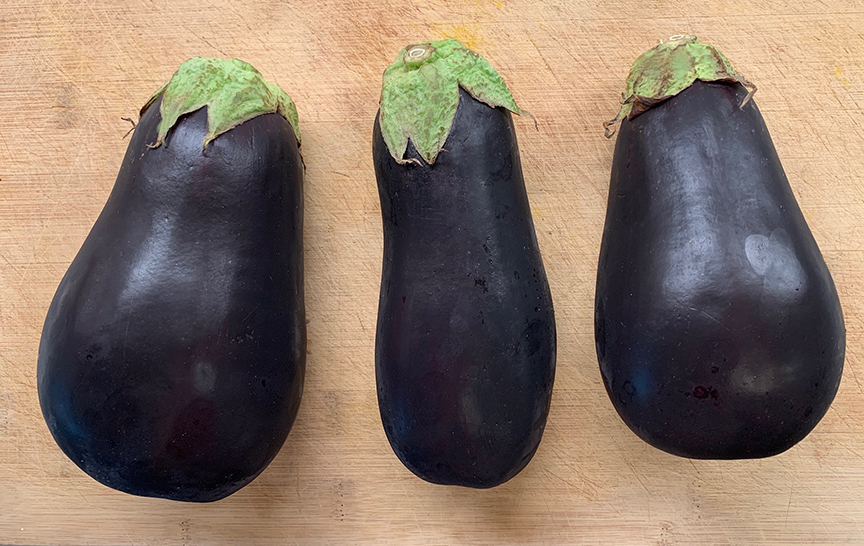 Each eggplant is cut into two halves 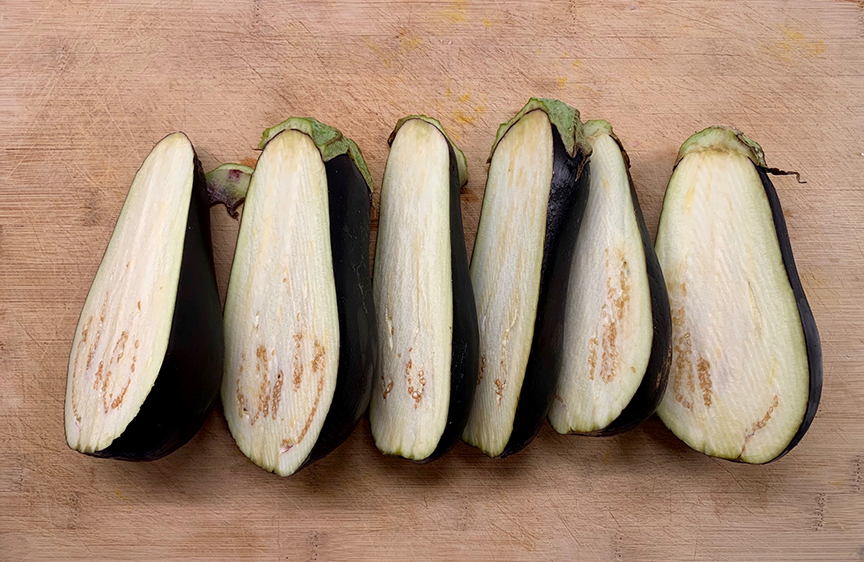 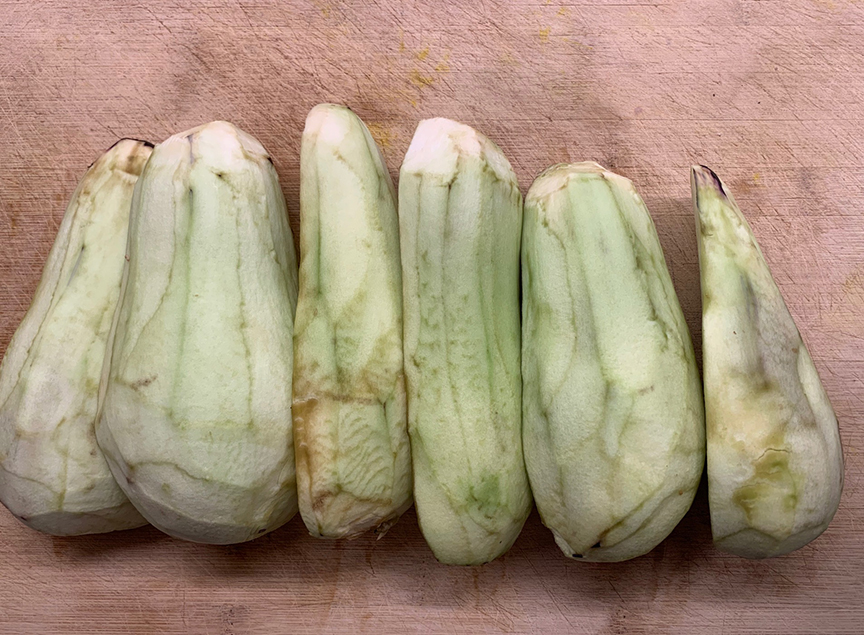 Each half is cut into about ten moon-shaped slices. 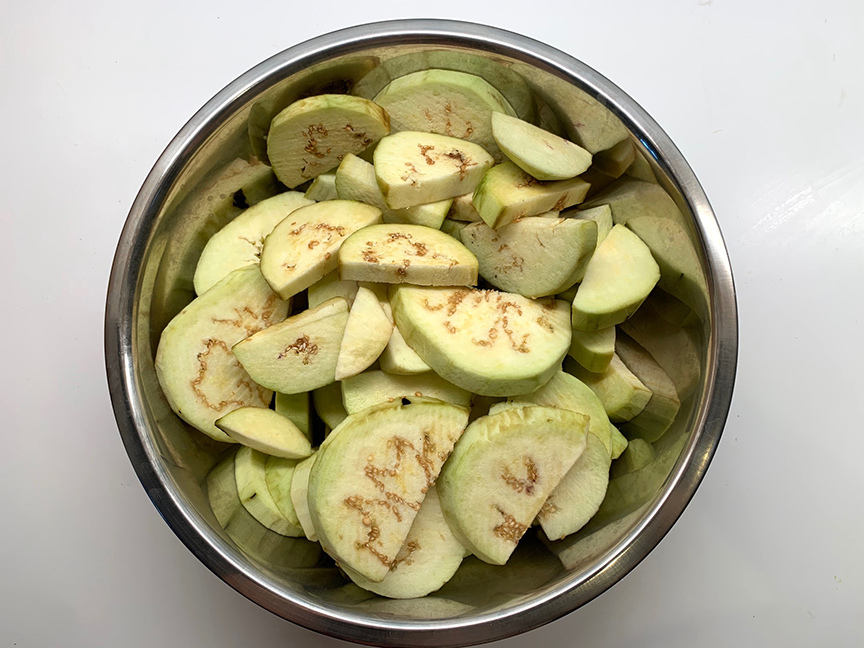 Put slices in a bowl of water and add a teaspoon of salt. 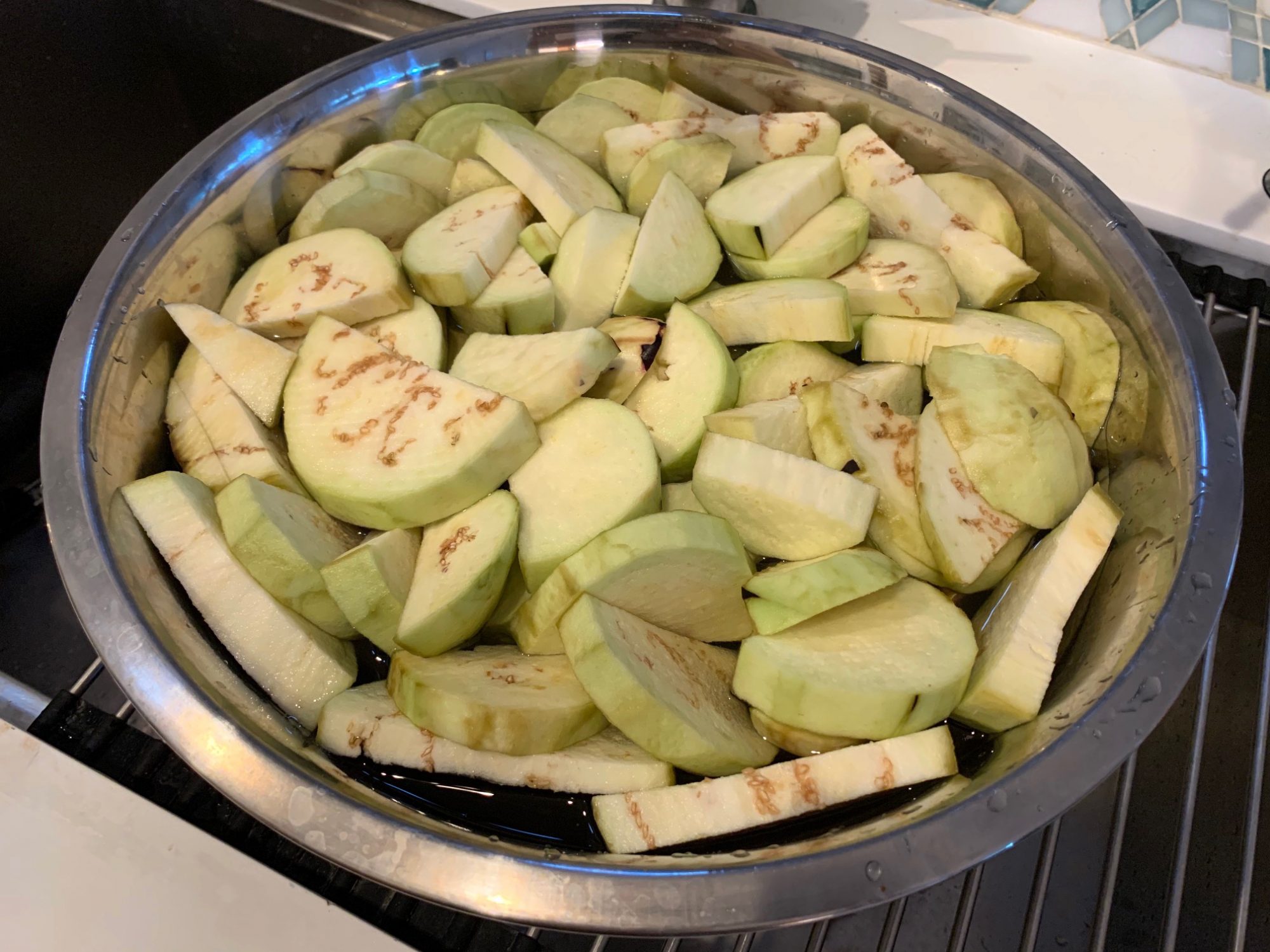 Soak in water for half an hour. Pre-heat cast iron pan (if you have one) in oven on 400˚. After half hour remove pieces and set on a towel. 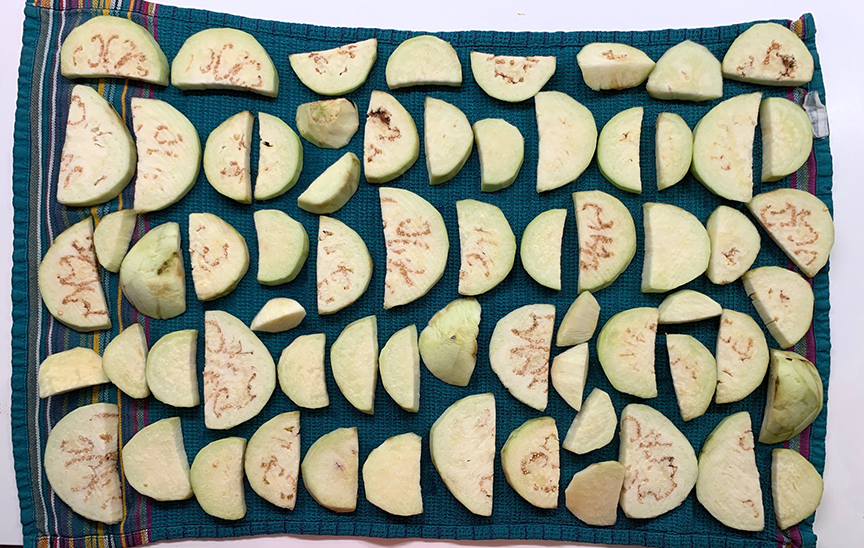 Crack the eggs and scramble in a bowl, then submerge the slices, one by one 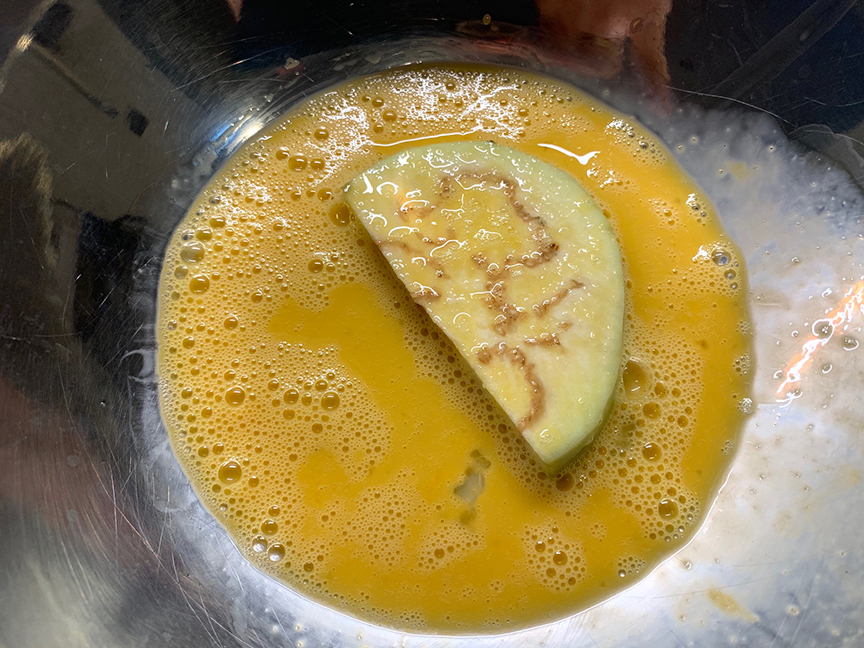 and set them aside on a plate. 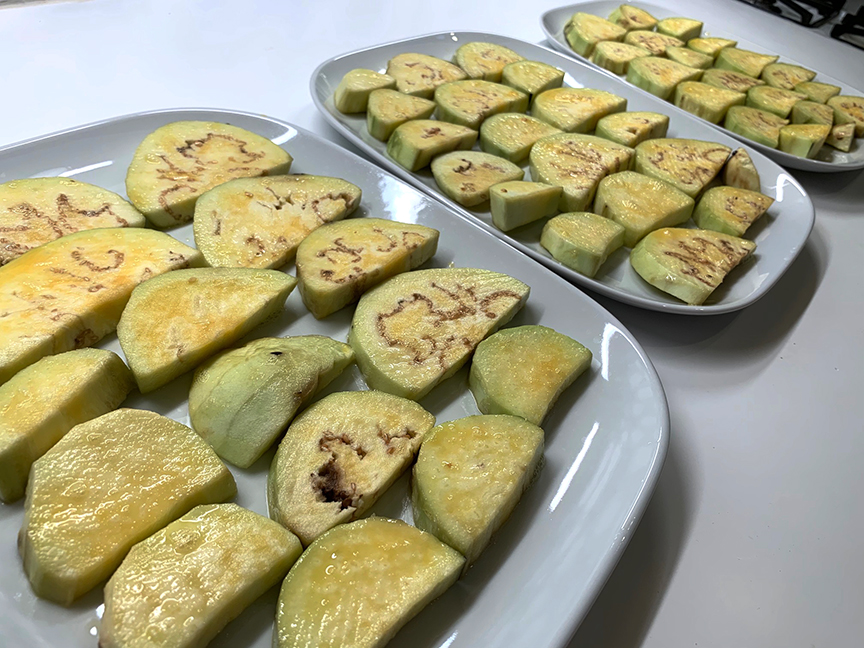 Remove pan from oven (if using cast-iron), place on the stovetop on medium high heat, and pour in about 1/4 cup avocado oil. Using tongs so you won’t get splattered by hot oil, place slices of eggplant side by side till the bottom is covered. 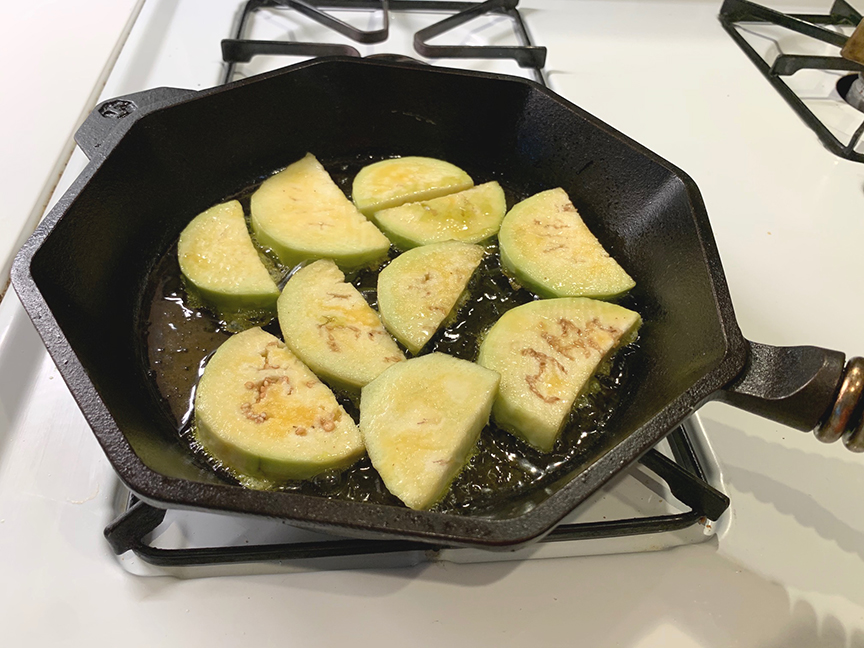 After two minutes lift up slices to check shade underneath. When all are browned, flip over. 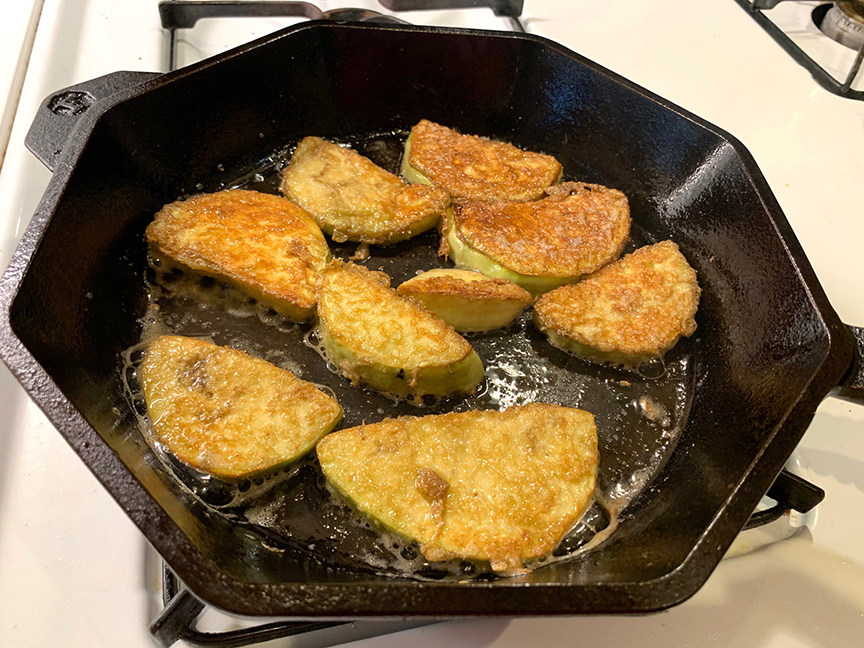 When all slices are nicely browned on both sides, remove carefully with tongs to serving dish. Sprinkle with sea salt and cinnamon to taste. 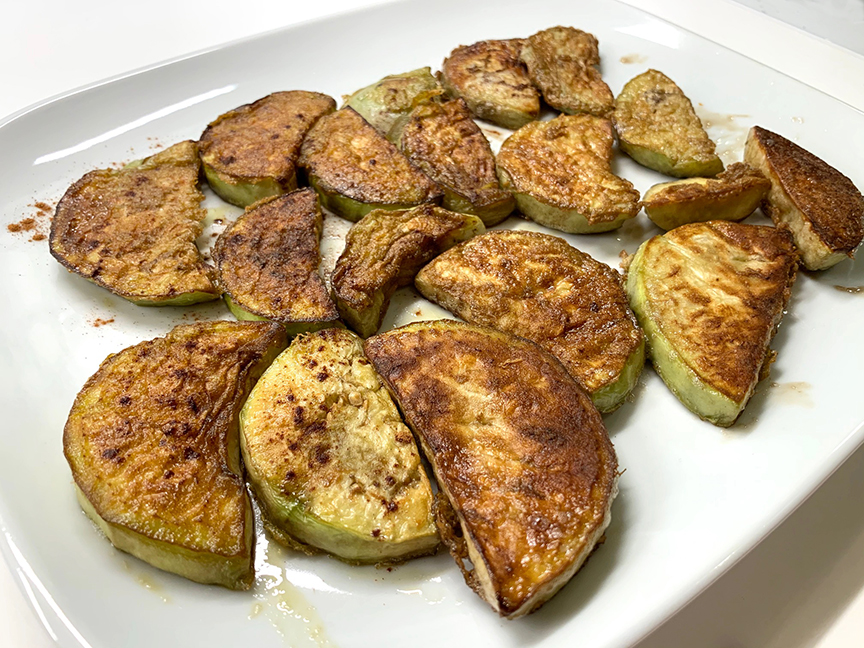 Truth be told, I was flabbergasted at how yummy these were. Tastes like a cross between a grilled portabella mushroom and fried potato latkes. They are fleshy on the inside and crispy on the outside with a sweet and savory taste that are the perfect duet.

Modern twist on Sephardic eggplant from the 15th century.

Note that this recipe fills three platters. Each platter feeds about 3, so plan accordingly.

The original great grandmother did not dry the eggplants slices but I did so to allow the egg to absorb better.