Way. That bright and  sweet, friendly little miniature orange that you effortlessly pop into your mouth for a quick and comforting snack is made with the wastewater from oil drilling. 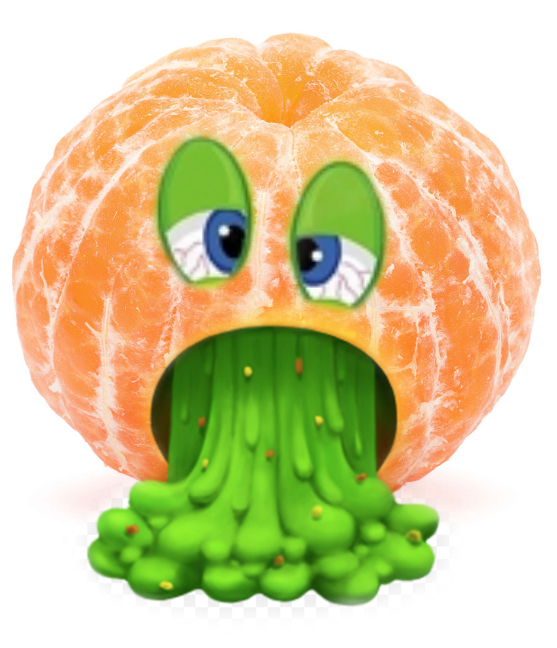 Should I cry or vomit?

I know, it sucks. You’ve been reading about tortured factory animals and their pharmaceutical feed as well as toxic pesticides sprayed gratuitously on strawberries and celery. You understand that what goes into the body of a cow or carrot also goes into your body. You are trying to make hard changes. But you weren’t thinking about the quality of the water used to grow your food. Who thinks about that? Practically no one. but I’ve got a story to tell.

This is what is happening.

California is running out of water. Not only are they in draught, but the government has allowed Nestle to siphon off 36 million gallons of water (in 2015 alone) from a national forest to produce bottled water that is sold outside the state. So California is drying up and big gas and oil companies are exploiting the water shortage to make money. Enter gobs of wastewater (called “produced water” or oil-produced water/OPW) released from the ground during drilling operations. These companies are selling millions of gallons of “treated” water to farmers for irrigation. Chevron alone sells 21 million gallons of wastewater each day for use on 45,000 acres of crops in Kern County, California.

What in God’s name is in that water?

Glad you asked. To start: Oil, grease, and salt. Also, trace elements, including boron, lithium, bromine, fluorine, and radium—some of my favorites! Produced water from gas operations contains hydrocarbons such as benzene, toluene, ethylbenzene, and xylene and are generally more toxic than produced waters from oil production. Drilling operations typically use additives like corrosion inhibitors (to maintain equipment), biocides (to eliminate bacteria) and solvents (to reduce certain kinds of deposits). Industrial solvents acetone and methyl chloride, which are toxic to humans, have regularly turned up in lab samples. The exact composition of produced water and its level of contaminants varies depending on the geographic location of the field and the geological formation that the water has been in contact with for hundreds of years. But it all sounds yummy, and I definitely want lots of all those things with my clementine!

The gas and oil companies don’t like to disclose the “proprietary chemicals” used in their drilling operations (why would they?) and the effects on public health and the environment are unavailable. The California water authority only started requiring some transparency in 2015 but you really have to dig deep to find any answers. Luckily, that’s what I do!

According to this site on produced water, toxic compounds used as chemical additives to facilitate drilling and production may leach into the produced water. Some underground formations contain natural radiation and this, too, can contaminate the water. Most produced water is “treated” on the platform and discharged into the ocean. Some is sent to commercial facilities that charge a fee for treating the water and then it’s sent on its merry way. To farms in Central California.

Hasn’t there been extensive testing for safety?

Why no, there has not. Let me explain how industrial chemicals get into your food. Until 2016, when slightly stricter chemical regulations finally passed Congress, a company could introduce a new chemical into the environment with absolutely no safety testing. They had only to inform the EPA of the new chemical. The burden was then on the EPA to review the chemical for safety and determine if it posed any health risks, and they had only 90 days to do so. If there was already compelling evidence of risk, the EPA could require the company to submit safety data. Otherwise, free to be you and me. If 90 days passed without any action or if studies were incomplete or inconclusive, the chemical entered the marketplace.

Chemicals are apparently safe unless proven dangerous. Only a tiny fraction of the 85,000 industrial chemicals in the marketplace have undergone any safety testing. Because the burden was on the government (until 2016) to demonstrate a clear threat, only a handful—like asbestos and PCBs—had ever been banned or restricted.

In 2016, After a years-long senate battle, a new Toxic Substances Control Act was passed to replace the outdated one from the 70s. It addressed many failures of the previous law and required modest safety measures. But, unsurprisingly, it also accommodated the interests of the chemical lobby.

Enter Scott Pruitt, new EPA chief. Before taking the helm of the EPA, Pruitt was heavily involved in lobbying for the gas and oil industry. Now his job is to protect the environment. Instead, Pruitt plans to roll back regulations put in place to stop greenhouse gas emissions and the polluting of our streams and waterways. As state attorney general, Pruitt participated in 14 lawsuits against the EPA—all fighting regulations. It is safe to assume that Pruitt will not be protecting consumers from oil wastewater in their food.

Meanwhile, California’s Central Valley grows 40 % of America’s produce and they are irrigating with gas wastewater. The state argues—very conveniently—that there are no studies showing a threat to public health. It’s the innocent until proven guilty tactic. But who is going to undertake such a study—a longterm study which evaluates Americans all over the country who eat tainted California produce and follows them over the years to evaluate the possible harm of cumulative consumption? All while teasing out other variables. And where is the control group that doesn’t eat any California produce? It’s nowhere. No one is able to do such a study, and the powers that be know it.

According to the USDA, there are no guidelines or limits for allowable levels of chemicals in water used for irrigation. There are some water quality standards, but these are put in place to protect crops, not people. Salinity can damage crops and soil, and produced water has high levels of dissolved ions, or sodium. So testing is done to calculate the sodium adsorption rate —this is a standard used to determine if water can be used for irrigation. But damage to humans? Meh. Not so important.

There is currently one study in effect, funded by the USDA. Samples of water, soil and crops from land where produced water is used will be compared to  samples where it is not used. Scientists will try to assess human and environmental risk. The results will not be out till May 2020, but guess what? Your clementines (and also, carrots, grapes, nuts, and many other foods) continue to be grown with wastewater. Innocent, apparently, until proven guilty. 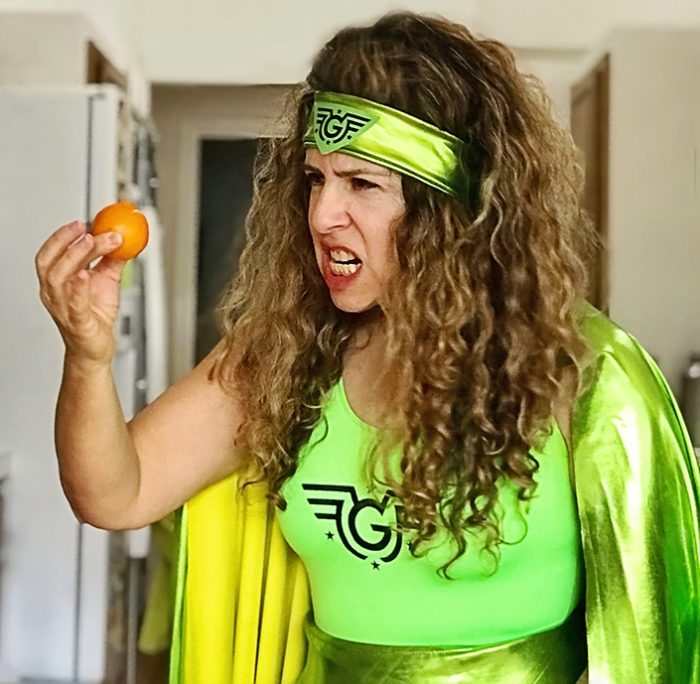 Treatment technologies. Yes, it’s treated first. But it’s hard to eliminate all the crap because there’s so much of it. The water has to undergo multiple processes. There is no easy solution. Some technologies being tested and used to detoxify produced water include hydrocyclones, induced gas flotation, walnut shell filters, electrolysis technologies, membrane filtration, ion exchange, and chemical softening systems. None is 100% effective.

Doesn’t it make more sense to keep gasoline contamination out of our food, just in case? Shouldn’t California ban this practice until studies have confirmed its safety? Or is it more important to protect the profits of the oil industry? (trick question)

Hey, I have an idea—I’ll buy organic, and then I won’t have to worry about it.

Unfortunately, USDA organic standards do not mandate that clean water be used on organic crops. Farmers are not even required to test or evaluate the water they use. Surprise!

Back to your clementine.

His name is Halo—presumably because of his near-divine goodness and wholesomeness 😇. Hello Halo, nice to meet you. Do you realize you’re grown with wastewater. Don’t believe it? It’s right here on your daddy’s website:

“Rather than allowing this “produced water” to go to waste, it is carefully treated, tested and approved for agricultural use, highly regulated, and well within safe drinking water standards. To demonstrate its quality, fruit and nut testing was conducted and showed absolutely no difference whatsoever regardless of the water source.”

This is deceptive. Is a person the same as a fruit or nut? No, I didn’t think so. Did you test the long term effects on the fruit and nut. No, I didn’t think so. Also, who did the testing? An unbiased third party or the Wonderful Company? Whose standards are you using for safety? Your own? Also, who’s doing the regulating? I’m curious, because aren’t any federal regulations in regard to food safety when it comes to the use of produced water on crops. I think a better name for you, little orange. is “Pinocchio”. The Pinocchio orange. From the Pinocchio company.

I am guessing that you will not be eating any more gasoline-infused clementines*.

What to do now?

If you live in Texas, you’ll find many varieties of delicious oranges from November to April. Goodbye Halos! See you on the dark side.

Was this article fun to read? Want to know more? This one‘s a good bedtime story!

*It turns out the Halos are mandarins, but that doesn’t rhyme with gasoline, so….