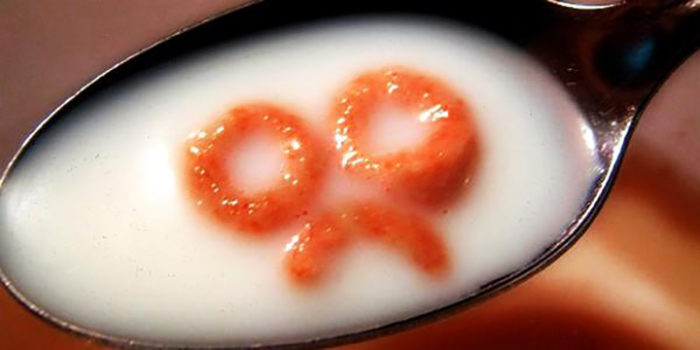 Ok, folks, I admit it: I am on a crusade to get you to stop eating breakfast cereal. It is a multi-pronged approach that includes cajoling, guilt, and scare tactics and today I will explain the way grains are tortured to make them into Cheerios and more. Then you’ll understand that breakfast cereal is nutrition-dead at best, and health destroying at worst. So fasten your seat belts.

Most of you have never heard of extrusion, so I am the lucky one who gets to be the messenger of bad news, the one who will kill your breakfast joy. But fear not, I always have alternatives, and I am going to get you (and your kids) to eat healthier, even if it kills me.

So what is it? Extrusion is:

Yes, I’m boring and I put the right answer at the end. But actually, b) is also correct, so it’s basically b) using grains instead of metal.

What’s wrong with shoving slurry through a mold?

Yeah, sounds yummy, huh? So here’s the deal: grains—even the ones masquerading as whole grains—are pulverized and mixed with a liquid that contains sugar, fats, dyes, and water. Then the goop goes through a machine called an extruder which is a die with holes in specific shapes (fun ones to lure your kids) that ensures uniformity during mass production. Extremely high heat and pressure are applied which kill most of the nutrients along with healthy fatty acids and amino acids (the building blocks of proteins)—all the good stuff that was in the original whole food. It also increases the glycemic index, or sugar content, of the food, and this spikes your blood glucose levels.

All your favorites are made this way…

According to biochemist Paul Stitt, this is how Cheerios are made, also Kellogg’s Rice Krispies, and even Trader Joe’s O’s, Nature’s Path Ancient Grains, Quakers Oatmeal Squares, plus the lofty sounding Veganic Sprouted Ancient Maize Flakes. Yup—all of them are extruded—even the ones that are made from responsibly grown grains. Then, to add insult to injury, they are coated with a sugar-oil spray to seal in their crunch and protect them from going soggy in milk. Most organic cereal has less coating, which is why it gets mushy faster.

Watch how breakfast cereal is manufactured. Just click on the video from American Extrusion International. Does this look like real food? These puffs would be better used for building projects—think of them as mini legos. Or maybe fun disposable jewelry. Or collage art. Or packing material!

Rice puffs? Kamut puffs? They look so innocent. Sorry again. This time it’s the grain–without the goop–that is forced through the extruder. And again, it becomes denatured and nutrion-starved. Want to do it yourself? Check out this hilarious video.

Now you get to pay five dollars for a box of industrial food-like stuff that cost the company a couple of cents. Paul Stitt claims that this is one of the most profitable and obscene food adulteration scams on earth. Big Food engages in clever marketing tactics to get your kids addicted, then bankrolls lobbyists to convince government officials that cereal is a healthy food. They pour advertising revenue into every possible media outlet to discourage anyone from running a story about the anti-breakfast that is providing such a nutrient-depleting start to our day. And voilà, you have hundreds of millions of unsuspecting people slurping up crunchy crap, paving the route to diabetes and worse.

A study was done involving rats which showed that eating extruded grains killed them off more quickly than eating just sugar and water. That’s right: rats with no food fared better than those eating extruded food. More research is needed, but don’t hold your breath for a better outcome. The extrusion process is known to alter proteins in food (called “zeins” in corn). So the high protein, high fiber varieties that seem healthier may actually be worse for you. There is some evidence that the proteins become unrecognizable to the human body. Disrupting the proteins can actually impact the nervous system. Who wants tortured neurotoxins for breakfast?!

Your children do, but that’s because they don’t understand what it is doing to them. But now you do. Just pretend that a bowl of cereal is equivalent to a big piece of chocolate cake made out of synthetic materials created in a lab. Don’t you want better for them?

Think that cereal is a good non-fat way to take some pounds off? Think again: cereals are almost totally composed of refined carbohydrates. These cause insulin spikes and result in fat storage. Sorry, Charlie!

Sad! I used to love cereal before you ruined it for me. What do I eat now?

Excellent question. It’s great to eat something high in protein, like pastured eggs or whole milk yogurt. Smoothies with some protein are ideal. Fruit and nuts are good. Basically, if it doesn’t look, taste, or feel like a factory carb, it’s probably a good choice!

For those of you who need that carb-like crunch or texture in the morning, here are some ideas:

Buy steel-cut oatmeal (not instant!) and follow the directions. Or step it up a notch and soak your grains the night before. This makes the oats easier on your digestion and ensures that the nutrients will be properly absorbed. Oats, like all grains, contain phytic acid which interferes with the absorption of key minerals like iron and zinc. Here’s the basic recipe:

is basically baked oats with sugar and other fun stuff added in. If you can get the sugar below 7g and the fun stuff is pumpkin seeds and goji berries, then I will give it the GFF stamp of approval. Here are some brands to explore. They aren’t cheap, but neither is chronic illness.

Do some research. If you can’t find these products locally, Amazon carries most and others can be purchased from the manufacturer’s website. They’re a little more than you’re used to paying, but so much less than hospital bills.

This article was just the tip of the iceberg. Paul Stitt gives a first hand account in Fighting the Food Giants of the inside workings of the giant food companies of America. He tells how they program you to crave certain foods, to overeat every day, to make you feel stuffed but hungry, and how this “mad energy” of the food industry is destroying you and what you can do about it.

As a food scientist he learned that the American food industry was out to deceive the public. HIs unrelenting demands to produce nutritious, non-addictive foods irritated his then employer—Quaker Oats—and led to his eventual termination. Since then he has devoted his entire life and career to nutrition and educating the public. This is an old book with very relevant information. Good bedtime reading. Get it here.

Extrusion is not the only Problem.

Want to know what’s in your cereal? Yes, you do! Get ready for the ride….