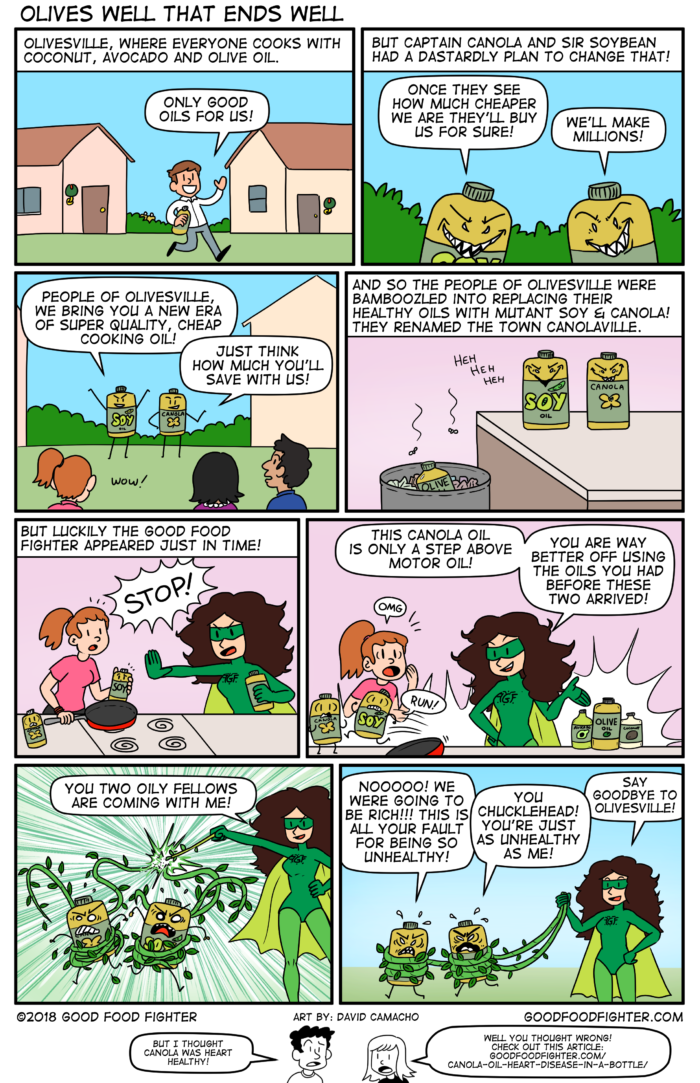 This actually did not end well. The fight is still alive and ongoing. Canola oil is in everything, everywhere. And most people still think it’s healthy. Some restaurants even proudly announce that they cook with it. Don’t use it! Don’t eat it!

People used to use traditional oils, oils that came from a quality food (like olive or coconut) and were extracted in a way that retained it’s nutrients (like cold pressing). The newer, cheap oils known as “vegetable oils” are actually industial seed oils, but the industry uses the term “vegetable” to make them sound healthy. These oils come from crops that are largely genetically modified nutritionally inferior, and actually damaging to health. They are manufactured using high heat and pressure which destroy its nutrients. Chemicals like hexane are part of the processing. Because vegetable oils are damaged when exposed to heat and light, they are rancid before they even land on your store shelf and therefore require deodorization. Canola, which is touted by many as a “healthy oil” comes from the toxic rapeseed plant which produced heart lesions in consumers. The Canadian Oil company genetically modified it to remove its naturally occuring toxic acid and launched a huge campaign to convince Canadians and Americans of its great merit nd affordability. Now Canola plants are grown all over the world. Don’t fall for the industry’s deception. Ask restaurants what they use and tell them you don’t want vegetable oil. Real oils cost more, but they cost less than medical bills. Your health is worth it!

Want to know more? Yes, of course you always do. Knowledge is power. Here is the dark and sinister story of Canola oil.

This is what the GFF looks like when she discovers Canola oil hiding in someone’s kitchen. Yes, the guilty, embarrassed owner of this revolting bottle got 100 lashings with a Wet Noodle (one of my power tools).