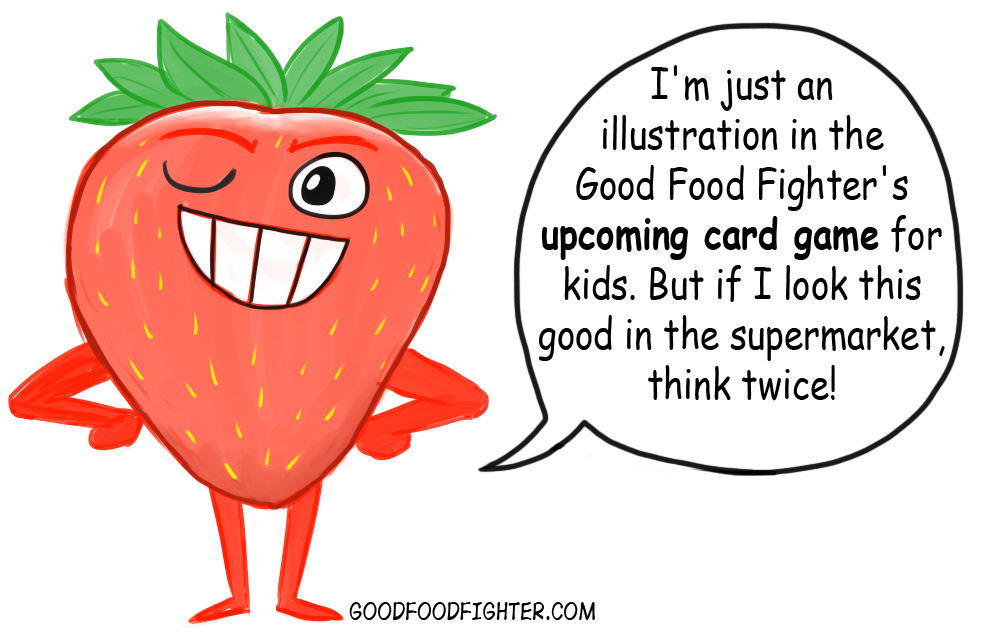 The shopping list we’ve all been waiting for is now out: this year’s Dirty Dozen. This is a Hall of Fame for the dirtiest produce, compiled from the research of the Environmental Working Group (EWG).

What does dirty mean?

Haha, yeah yeah, NOT THAT. I also don’t mean dirt from the ground. That, you can wash off. In this sense dirty means that it contains multiple residues from chemicals known to cause harm to human health. You want to be a smart shopper, right? So read on to find out which fruits and vegetables you should buy organic, and which conventional ones are relatively, comparatively safe.

You may have heard of the Dirty Dozen, but do you know where the term comes from?

The Dirty Dozen was first coined to describe the worst persistent organic pollutants (POPs) used in industry and found in the environment. These chemicals were deemed harmful to human health by the Intergovernmental Forum on Chemical Safety, an international conference convened jointly by the United Nations and the WHO in 1994. In 2001 a multilateral agreement was reached called the Stockholm Convention which required member countries to reduce the use of chemicals that were determined to be hazardous to the environment and to human health. Due to the “long range transport” of these chemicals, the Convention stipulates that no single government can adequately protect its citizens from POPs.

Since then, the Dirty Dozen has evolved into a list of fruits and vegetables containing the most harmful chemicals residues.

So can that large red plump gorgeous perfect unscathed strawberry really hurt you?

Yes, because it’s a Frankensteinberry.

According to the EWG, 99% of strawberries contain residues from pesticides. In fact, there may be 20 different kinds of pesticides on a single strawberry. Try digesting that. You can almost feel the heartburn….

Trust me: I don’t relish eating tiny aphids that sometimes hide in organic Brussels sprouts and I don’t savor the tiny holes and brown spots on my kale. Nor do I delight in farmers market carrots and green onions that are literally covered in dirt (Yes, it happens!). But I would gladly scrub my greens just a little bit more and tear off the sullied parts or occasionally swallow a microscopic insect than put myself at risk for a huge range of diseases including cancer. The evidence is accumulating that the increasing use of chemicals in our food supply and environment are responsible for the increasing incidence of almost all cancers. Check out the mind-numbingly long list of known and suspected carcinogens listed by the American Cancer Society.

So let’s examine that delicious strawberry:

Among the commonly used pesticides are:

Kale, an amazing superfood, is also amazingly contaminated: 60% contains a pesticide which has been designated a possible carcinogen and is banned in Europe. 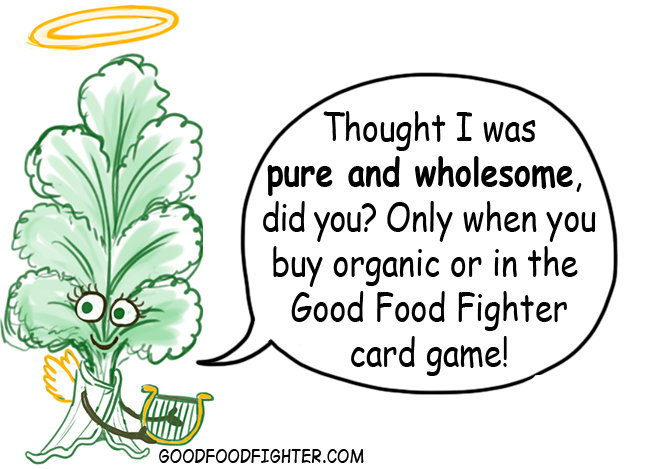 Why are these terrible chemicals allowed on my food?

Because we have weak regulatory laws. Why is that? It’s because the Food and Drug Administration is staffed with executives from pharmaceutical and major food companies. Anyone see a conflict of interest? Their alleged purpose is to serve the interests and safety of the American public. But over time, and especially over the past administration, this goal has been eroded and now their agenda is to protect the interests and profits of big industry. This comes at the expense of consumers who believe they are buying safe products when they actually are not. Consumers really have no idea what they are buying because it takes constant research to keep up with the chemicals that are currently approved for use in the food supply. In Europe the laws protect consumers first—chemicals are not approved for use in industry, in the marketplace, in the environment until the manufacturer can demonstrate through rigorous studies that they are safe. Europe has banned many of the chemicals that are freely used in America.

Here’s what the GFF has to say about that, in animation form.

Consider the history of pesticides.

Anyone remember DDT? This chemical was heralded as the magic bullet for malaria control and was sprayed all over the United States and much of the world in the 1940s. The chemist who discovered its use as a poison against arthropods was awarded a Nobel prize. And then health problems started showing up in populations near agricultural areas that were heavily sprayed—breast and other cancers, infertility and miscarriages, nervous system damage, etc. Animals like the bald eagle and peregrine falcon started to disappear. It became clear that some strains of insects were becoming DDT-resistant and that DDT was actually killing their natural predators. The marine biologist Rachel Carson who wrote Silent Spring, demonstrated that DDT was a biocide that killed everything living, not just pests, and that they were upsetting the balance of nature.

Do  you ever wonder if the miracle pesticides that make your fruit look so perfect will end up being banned? Look out for that mouth-watering peach! It probably contains chlorpyrifos, a neurotoxic pesticide that can cause brain damage in kids even in really low doses. The European Union, California, and New York have all announced plans to ban it, but it’s still on your apples, peaches, and grapes. 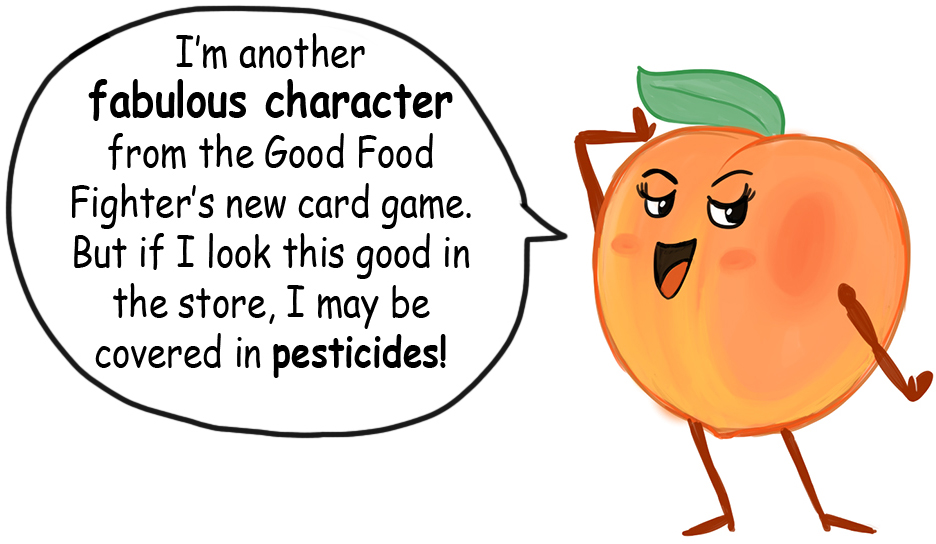 Why do I believe the Environmental Working Group? Maybe they’re making it up. Maybe it’s partisan politics. Fake news!

Actually, this non-profit gets its data from the USDA’s Pesticide Data Program. Scientists at the Department of Agriculture are tasked with testing produce samples for pesticide residues and this information is publicly available. Information about the chemicals used in agriculture is widely available, so you can easily research and find the results on your own.

It is important to note that many federal agencies, including the FDA and EPA, have been subjected to major rollbacks of environmental and consumer protection laws. This means that chemicals that were previously banned are now being used again.

Not only that, American food is still tainted with chemicals no longer in use, like DDT. If you skim my article and read nothing else, make time to read this report by Scientific American. It will blow your mind and provide a great context for the organic movement and the reason for and value of organic food.

In case you wanted a randomized placebo study to demonstrate the association between eating organic and cancer:

Association of Frequency of Organic Food Consumption with Cancer Risk 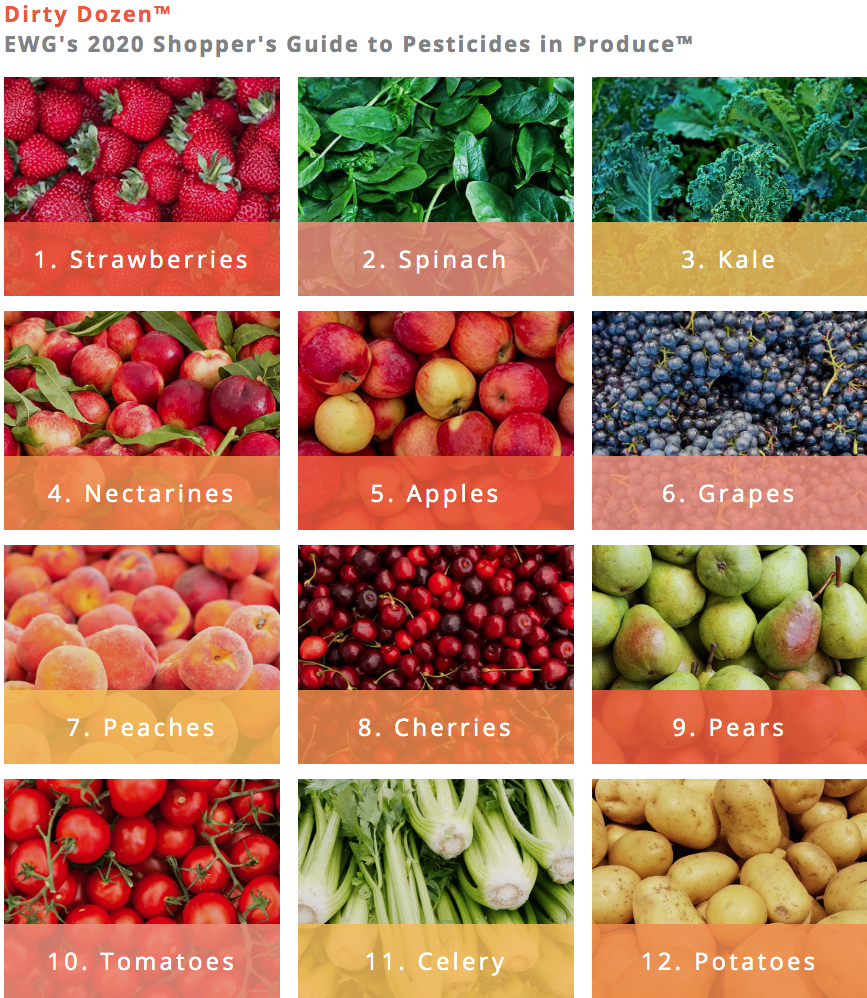 And here is the list of the least contaminated fruits and vegetables; if you need to make compromises, you can buy these in non-organic form.

Wishing you a healthy shopping cart and delicious home-made meals. Here are some ideas for quarantine cooking with kids.