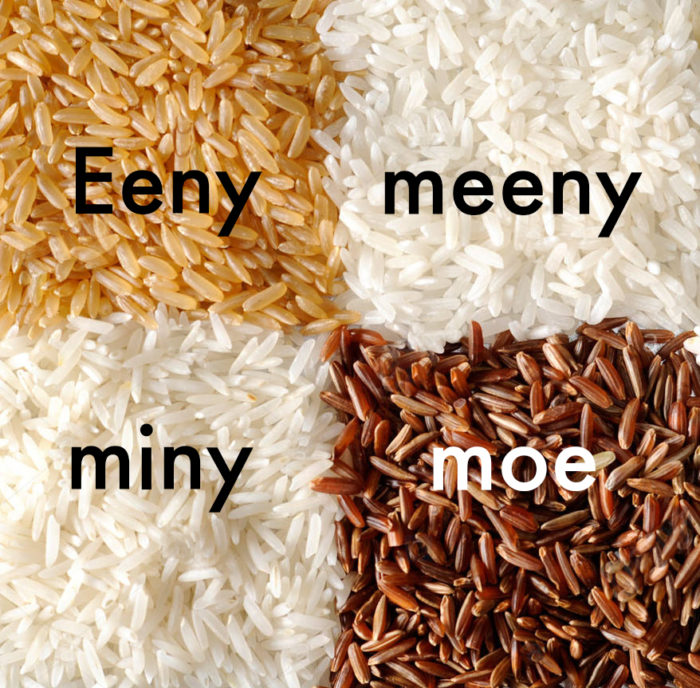 That’s the question of the day. And the answer is:

Sorry rice-lovers, it’s G. That doesn’t mean you can’t enjoy a bowl every now and then and maybe some rice pasta if you’re gluten free. But make it a treat. Like after you run a marathon.

Yes, it’s hard for me, too. I grew up eating brown rice—lots of it. My mother, who was raised on Uncle Ben’s rice, thought it was a huge improvement. With all that bran and germ in tact it seems like a superfood! Brown rice has almost twice the protein and fiber of white rice and 4 times as much Omega-3 essential oils. Lots of great nutrients like zinc and magnesium. What could possibly be the problem?

Arsenic. According to Consumer Reports, Arsenic levels are significantly higher in brown rice than in white rice. This is because arsenic is concentrated in the bran, and the bran is removed in white rice. Some of the brown rice brands tested contained 50% more arsenic than then the FDA-approved “safe limit” per serving (and the “safe limit” tends to be biased towards industry interests), and some contained twice the safe limit. Some of the worst rated foods came from processed brown rice: brown rice syrup, brown rice pasta, rice cakes and brown rice crisps. These are marketed as “healthy”, “whole grain rich” and “gluten-free” to persuade you that they’re healthy, but arsenic is toxic.

How to cut your arsenic exposure:

Is Asian rice lower in arsenic?

Yes. But imported rice often contains other things you don’t want to eat. Take a peek. Farmers in places like Sri Lanka and Bangladesh tend to use toxic pesticides. Some are banned by their governments but are used anyway. Most are imported into the U.S. without any kind of regulation or testing.

What about Fiber? Yes it has some. But not nearly as much as fruits and vegetables. That’s where you should be getting your fiber.

So what about white? Much easier on the digestion without all those anti-nutrients, right? And lower arsenic. Sounds like I’ve found the perfect food.

It’s actually not good for your gut, but there are bigger problems:

Glycemic Index/Load. I said it before when I was bashing bread, and I’ll say it again because all that white rice you’re eating is probably causing cognitive decline: white rice is basically pure starch. That’s means that it spikes your blood sugar levels, and when this happens repeatedly it causes insulin resistance. This article by The Mayo Clinic and this article by Web MD explain the glycemic index. You’ll see in this chart that white rice (p.2) is in bad company: with a glycemic index of 89, it increases your blood sugar about the same as Betty Crocker vanilla cake, and Fanta orange soda, and more than a Snickers bar.

Diabetes. Carbs are converted to glucose when you digest them. This causes your blood sugar levels to rise, and in response, your pancreas produces insulin, which ushers the sugar into your cells to be used for energy. Some foods cause more of a blood sugar spike than other foods, and white rice is one of them. If you eat a lot of  processed “white” food like bread and pasta and rice, you are putting heavy demands on your insulin-making cells and pancreas; eventually the insulin stops working properly and glucose builds up in your bloodstream. Finally, your pancreas cannot produce sufficient insulin. This condition is called diabetes.

Weight Gain. 50 studies on diet and weight gain were reviewed by the journal Food and Nutrition Research. The researchers concluded that the more refined grains (like white bread and white rice) subjects ate, the more weight they gained.

Nutritionally Dead. White rice has been stripped of iron, vitamins, zinc, magnesium and other nutrients during the refining process. This includes the elimination of vitamin B (thiamin), whose absence caused heart failure and paralysis in sailors who were eating little else. Stripped rice is “enriched” with synthetic vitamins and iron and marketed as a nutritious food. But it isn’t: the hull, husk, and bran have been removed, and with it many chemicals,. But what’s left is no better: pure starchy refined carbs that are rapidly processed and enter the bloodstream like an injection of sugar.

So you’re going to eat it anyway?

Okay, if you insist, but at least do this:

What about other grains? Try ancient grains and “pesudo-grains”. They are low-glycemic (don’t spike blood sugar) and low-arsenic. You should still pre-soak  and cook with extra water to reduce anti-nutrients and improve digestibility. Fermenting with sourdough is one of the best ways to remove anti-nutrients.

quinoa. Related to beets, chard, and spinach, quinoa is technically a seed and not a grain. This ancient South American power food is packed with protein—in fact, quinoa is one of few vegetarian foods that is a complete protein, containing all the essential amino acids. An excellent source of B vitamins and iron, it is especially helpful for vegetarians. And it contains healthy Omega-3 fatty acids which everyone needs.

buckwheat. It’s not related to wheat and it isn’t a grain; it’s actually related to a green herb called sorrel and rhubarb. First cultivated about 6000 years ago in Tibet, it was one of the first crops brought to America from Europe. It’s seeds have traditionally been made into a porridge. It’s packed with magnesium, a mineral that is critical for hundreds of functions in the body. It also contains manganese which helps convert carbs and proteins into energy and boosts the nervous system. It is high in B vitamins and iron. And gluten-free.

amaranth (the pink plant above). Amaranth is native to Central America and was a staple of the Aztecs. There are over 60 varieties and many are harvested for their leaves; only a few are grown for grain. Part of the Caryophyllales family, it’s not technically a grain, making it a cousin of cacti, beets, and carnations.

kamut. This is actually a trade name for khorasan, which is a region in Iran. An ancient grain, it naturally evolved from emmer. Kamut seems to be grown organically and has not undergone hybridization.

einkorn. This is the most ancient wheat—it grew wild in Paleolithic times. It was domesticated about 12,000 years ago when our forbears realized that they could plant its seeds, leading to the birth of agriculture. It is nearly extinct but has been grown continuously in small quantities and its genetic structure has remained the same. Its proteins are so different from modern wheat—the plant has never been hybridized—that it may be tolerated by those with gluten intolerance.  The cracked version is called bulgur which is most often found in tabbouleh salad. It’s a great source of iron and magnesium. Also, a fiber and protein powerhouse.

wild rice. If you’re going to do rice, this is the one. Native to North America and China, wild rice is not a true rice or “cereal grass”, it’s an aquatic grass. Unlike rice, it has not undergone extensive hybridization. It is more nutrient-dense (containing phosphorous, zinc, magnesium) and has more protein than other types of rice (like the amino acid lysine, which is vital for optimal growth) plus three times the fiber. And it’ll make you full for longer so you’ll eat less. Still, it contains those pesky anti-nutrients.

black (forbidden) rice. This is an Asian heirloom variety that contains some of the same cancer-fighting antioxidants as berries. So if you can’t give up rice, try this.

cauliflower rice. Something new and delish! 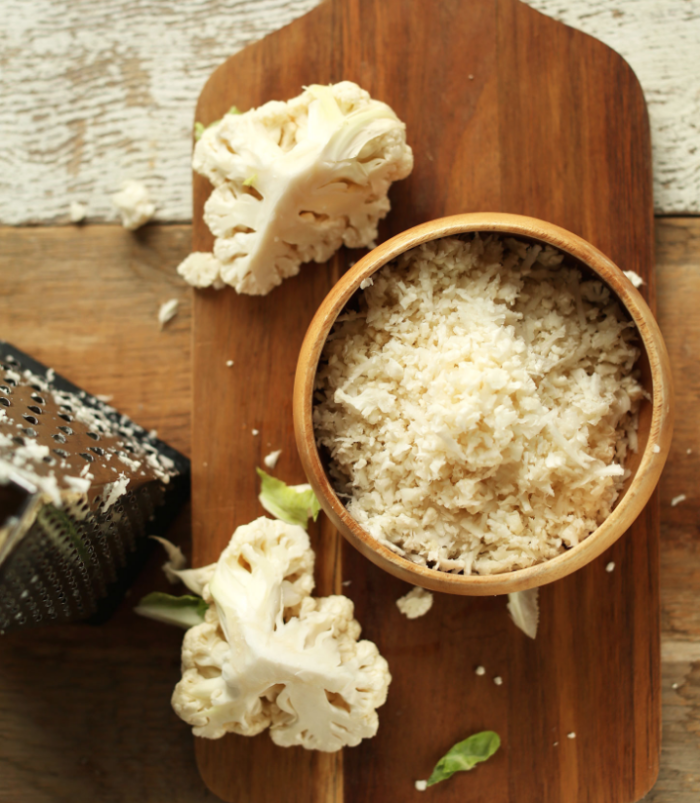 sweet potato and cassava. Starchy tubers have many redeeming qualities.

What is farro? Farro is actually an umbrella term for three ancient grains: einkorn, emmer, and spelt. Most farro grown in the US is emmer. Emmer is also used for most pasta in Italy, which is why gluten sufferers can go to Italy and eat their pasta without suffering. I don’t recommend spelt because it’s very similar to (and the precursor of) modern wheat. Sometimes cereal grains are also called farro, so if you see it on a menu or at your grocer, find out what it really is. Cereal grains like wheat and rye are part of the family Poaceae and are the seeds of grasses.

Want to know more? Of course you do!

Grain Brain.  “…carbs are destroying your brain. And not just unhealthy carbs, but even healthy ones like whole grains can cause dementia, ADHD, anxiety, chronic headaches, depression, and much more…we can remedy our most feared maladies without drugs…alleviate, or even reverse brain disease, eliminate brain fog symptoms, and improve memory and energy levels.”

Wheat Belly. “…we reject all foods made with high-yield semidwarf wheat—the worst crop ever created in a laboratory. We also eliminate all grains, as they share characteristics with wheat. From arthritis to acid reflux to schizophrenia, these can be either caused or made worse by wheat — this food we are advised to eat more of. It’s about being set free from the peculiar appetite-stimulating effects of the opiate-like compounds unique to wheat.

Fun Quiz: How many varieties of rice are there?

Answer: d. Find them all here!