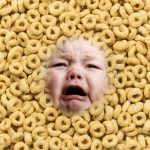 What??? You thought Cheerios were harmless enough—low in sugar and a good quick breakfast or snack, right? Wrong. Very wrong. And here's why: they are made from a grain that has been heavily sprayed by Monsanto's weed-killer Roundup. The predominant chemical in it, Glyphosate, has been researched ... END_OF_DOCUMENT_TOKEN_TO_BE_REPLACED 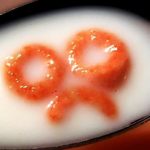 Ok, folks, I admit it: I am on a crusade to get you to stop eating breakfast cereal. It is a multi-pronged approach that includes cajoling, guilt, and scare tactics and today I will explain the way grains are tortured to make them into Cheerios and more. Then you'll understand that breakfast cereal ... END_OF_DOCUMENT_TOKEN_TO_BE_REPLACED 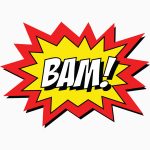 The Whistle-blowing, Nutrition-Activist, Consumer-Advocate, Outraged, Fun, Friendly Superhero is now a comic strip! Check out the Good Food Fighter in action battling unethical companies and protecting unsuspecting people from hidden toxins in their food. Share this with a kid! Tell me if ... END_OF_DOCUMENT_TOKEN_TO_BE_REPLACED 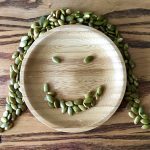 Seriously? Who would eat seeds out of a pumpkin? Isn't that like eating watermelon seeds? Nope. Pumpkin kernels with the shell removed, also called pépitas, are dark green and delicious and they're available at most supermarkets. I buy mine in bulk. Some people like them raw and unsalted, but ... END_OF_DOCUMENT_TOKEN_TO_BE_REPLACED

My kid has a friend who eats whatever he likes for breakfast. What does he like? He likes processed carbs. Tons and tons of them, preferably with lots of processed sugar. Cereal is usually on the breakfast table along with bread and jam, accompanied by orange juice. Many parents are content ... END_OF_DOCUMENT_TOKEN_TO_BE_REPLACED